Bill Gates, co-chair of the Bill & Melinda Gates Foundation, while announcing a commitment of up to $450 million to support the eradication of polio, has appreciated the role of Pakistan’s Rotary Polio Plus Committee, headed by Aziz Memon. 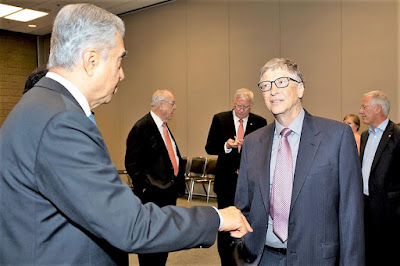 Speaking to an audience of nearly 40,000 Rotary members attending the humanitarian organization’s annual convention in Atlanta, Gates recognized the good work being done in Pakistan by the Rotary Polio Plus Committee as he made a special mention of the Resource Centre developed in Nowshera.

Besides exchanging views with the Chair of Pakistan’s Rotary Polio Plus Committee, Aziz Memon, Gates also had a one-to-one meeting with Senator Ayesha Raza, the focal person for the Prime Minister of Pakistan.

Meanwhile Rotary and the Bill & Melinda Gates Foundation renewed their longstanding support for ending polio, a paralyzing, life-altering scourge on the verge of becoming the second human disease ever to be eliminated. Rotary committed to raise $50 million per year over the next three years, with every dollar to be matched with two additional dollars from the Gates Foundation.

This expanded agreement will translate into $450 million for polio eradication activities, including immunization and surveillance over the next three years. This critical funding helps ensure countries around the world remain polio-free and that polio is ended in the remaining three endemic countries: Afghanistan, Nigeria, and Pakistan. 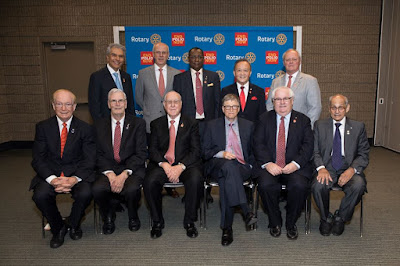 “In 2016, fewer children were paralyzed by polio than ever before, thanks to the dedication of Rotary members and our partners. The paralysis of even one child by a preventable disease is unacceptable, and I'm proud to see our members redoubling their commitment to ensure we reach every single child with the polio vaccine,” John Germ, President, Rotary International, observed.

In a partnership spanning a decade, Rotary and the Gates Foundation, along with the other Global Polio Eradication Initiative (GPEI) partners, have led the effort to end polio worldwide.

This funding extension reaffirms a commitment established at the 2013 Rotary Convention in Lisbon, Portugal, when the Gates Foundation pledged to match Rotary contributions two-to-one, up to $35 million per year through 2018. Rotary, including matching funds from the Gates Foundation, has donated more than $1.6 billion to polio eradication.

“The vision of eradicating polio began with Rotary, and its support of that effort has been unwavering for more than 35 years. Rotary’s commitment to raise $150 million over the next three years to end polio forever is a testament to the compassion, generosity, and kindness of more than a million Rotarians around the world,” Gates stated.

The announcement came on the heels of the news that world governments and other donors have pledged to contribute US$1.2 billion total to the GPEI for polio eradication efforts. The government funding, also announce at the Rotary Convention, will substantially help to close the US$1.5 billion funding gap, allowing partners to immunize 450 million children every year and support rigorous disease surveillance in both endemic and at-risk polio-free countries.

While the government funding announced made considerable headway in the fight to end polio, continued support from donors remains vital to achieve a polio-free world. The global eradication of polio has been Rotary’s top priority since 1985.

Through the Global Polio Eradication Initiative, a public-private partnership that includes Rotary, the Bill & Melinda Gates Foundation, the U.S. Centers for Disease Control and Prevention, the World Health Organization, and UNICEF, the incidence of polio has plummeted by more than 99.9 percent, from about 350,000 cases a year at the start of the initiative to just 37 cases in 2016.

Rotary brings together a global network of volunteers dedicated to tackling the world’s most pressing humanitarian challenges. Rotary connects 1.2 million members of more than 35,000 Rotary clubs in over 200 countries and geographical areas. Their work improves lives at both the local and international levels, from helping families in need in their own communities to working toward a polio-free world.
Posted by Chief Editor at 9:42 PM 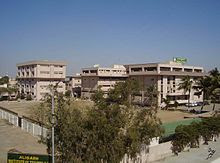 The Sir Syed University of Engineering and Technology (SSUET), Karachi, has announced to organize the inaugural International Conference on biomedical engineering and medical sciences in the second week of October 2017.

It will be a mega event to be held as part of the celebration activities on the eve of 200th birth anniversary of great reformer, educationist and visionary Sir Syed Ahmad Khan.

A number of memorable events have already been held under the aegis of the SSUET and the AMUOBA while more are to follow during the year with the biggest being the Sir Syed Day, an annual feature, to be observed on October 17.

The Chancellor SSUET, Jawaid Anwar, is the Patron-in Chief of the Conference while Vice-Chancellor, Prof Dr M Afzal Haque, is the patron.

Besides a large number of biomedical scientists and engineers from home, about a dozen speakers are expected from abroad including those from USA, Sweden, Canada, Germany, South Korea, Malaysia, Saudi Arabia, Ireland, Finland and UK having confirmed their participation.

Biomedical engineering applies engineering principles to medicine and improving quality of life for humans and animals. It is a highly trans-disciplinary field, integrating physical, chemical and mathematical sciences with clinical studies.

Biomedical engineers use their expertise in engineering, biomedical engineering sciences (biophysics, biochemistry, biotechnology and physiology) besides medicine to make the world a healthier place. They develop and apply trans-disciplinary knowledge and skills to solve complex problems and improve health care technology, from diagnostics to treatment.

The two-day conference aims to address new developments in the domain of biomedical engineering and medical sciences. It will host talks of internationally renowned speakers from industry, academics and research institutes.
Posted by Chief Editor at 10:08 PM 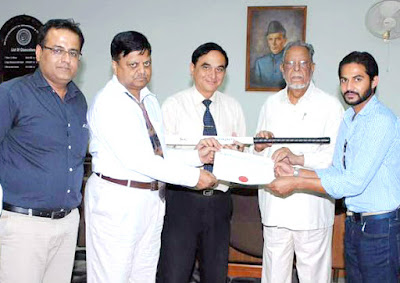 The captain of the Pakistan hockey team, Olympian Jaseem Khan, who remained a student of the Sir Syed University of Engineering and Technology (SSUET), Karachi, and obtained an engineering degree from the institution, visited his Alma Mater.

The Chancellor eulogized the services of Jaseem Khan and described him a special talent which emerged from the SSUET and became a national asset.

Wishing him all the best in his future career, Chancellor Jawaid Anwar presented him the university's souvenir The Director Sports SSUET, Mubbashir Mukhtar, Javed Iqbal and Asif Zaheer were also present on the occasion.
Posted by Chief Editor at 2:56 PM