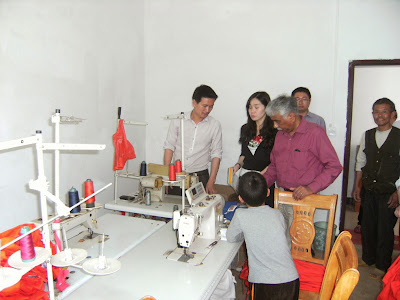 Where there is a will there is a way, it was true with a poor farmer who never dreamt that one day he his son owns a small garment factory and they all will enjoy a happy life from poverty under one room, but it all possible due to President Xi Jinping economic reforms policies directed towards poverty elevation for the down trodden people living in remote areas.

Rekindling his tale to this scribe, Yang Xuesheng said that his hometown was located in the third group of Gaishang Village, Butou Township. The whole family comprising of six members lived in two-room dilapidated home, where life was miserable as he also used to store stock of food and other sundries there.

In 2012, benefiting from the policies of the dangerous old adobes reforming, Yang Xuesheng started to build a new house in Ming’en New village with the support of local leadership. In Chinese language “Ming’en” means keeping the kindness in mind and gratitude.

Living in a new cemented house, a delighted Yang said now not only every member of family his has separate room. His son and daughter-in-law who used to work in Guangdong Province returned and opened a small-scale apparel factory in our new house.

In one of the rooms, his son has installed six stitching machines and with the support of his wife and other workers, he has roaring business now. By working at their home, they can both make money and take care of their children and the elders.

“Life of our family is improving steadily,” Yang’s son said. "I had never dreamed of living in such a beautiful house, thanks to the welfare policy of our Party of CPC, and especial thanks to party Chairman Xi Jinping’s deep concern towards the poor quality of living in former soviet area in Ganzhou,” he remarked. 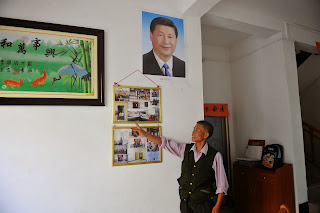 Talking about the life now, Yang Xuesheng feels so grateful, adding that the new house is spacious and looks beautiful. It’s convenient for peoples’ living here as there is abundance of potable tap water and uninterrupted power-supply that is essential to run the small stitching factory.

There are also many solar street lights lighting at night, so that people can dance at the community centres, the same way people live in developed cities. In order to express his special gratitude to the welfare policies of the Party, at the end of 2013, Yang Xuesheng submitted an application to the local Party organization, trying his best to move closer to the Party and to devote himself for the Party.

After the State Council announced a number of proposals on Supporting Revitalization and Development of Gannan and other Former Central Soviet Areas, this county considered the rehabilitations and reconstructions of dilapidated houses in the countryside as the most beneficial peoples’ livelihood project.

Ming’en new village is now exploring a new way to integrate urban and rural integration. Meanwhile the village focuses on improving the complement of essential public services. All are aimed at constructing a place that is suitable to live and work, and that makes people feel happy, thanks to President Xi, he remarked.
Posted by Chief Editor at 12:06 PM 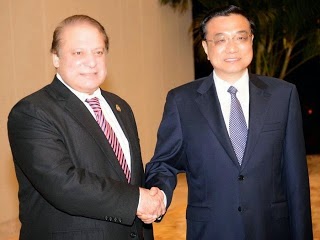 A veteran of Red Army while praising Prime Minister Mian Nawaz Sharif for his address and participation in the Boao Forum for Asia in said that need to emulate the policies of present leadership of led by President Xi Jingping to address the economic woes.

“I was very delighted to see on television your prime minister addressing the Boao Forum and meeting Premier Li Keqiang,” Zhong Ming remarked in an exclusive interview.

Zhong, who will turn 100-year in coming August, said that “together we (Pakistan-China) can build a harmonious society. The cooperation between the two countries will have win-win situation for both the people, he added.

The veteran Red Army solder said that if welfare polices of is emulated by the present government in , it can also help improve the lot of the common people.

Highlighting the grass-root level policies of the Chinese government particularly for the down trodden masses lived in surrounding counties and villages of Ganzhou in below poverty line, he said that now prosperity can be seen on their face. It was possible because of upward trajectory of the socio-economic condition of the villagers, he noted.

Zhong, on the directions of Chairman Mao Zedong served in various capacities in Red army and also assigned tasks in strategic important province.

Since 2012, when President Xi was holding the charge as Country’s Vice-President he had approved a number of welfare projects on the recommendations of the local party head Mr. He Shunping of Xingguo county in Ganzhou, Jiangxi province.

Now people even at the county level have uninterrupted electricity, well equipped schools, clinics, internet and even houses for old and retired service people, a senior local government   official said .
He pointed out that under a policy, farmers were provided new homes for which major chunk of money was arranged by the banks on the instructions of the government on very nominal interest rate.

“We are very pleased and proud in living in new homes, as in old homes, life was miserable especially during monsoon season when we were constrained to live in mud-home where water used to creep from roof and walls,” Wu Guanghuang, a 78-year old farmer of Xinfeng county in Ganzhou, said who had fortunately survived from the massive flooding that inundated his muddy house built within his field of tobacco crop.