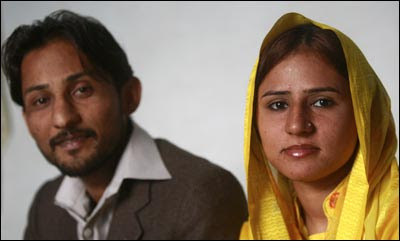 Pervez Chachar and his wife Humera Kambo live in the police headquarters in Karachi. Their crime? They fell in love and married without their families' permission.
The newlyweds dare not venture out of the police station as they fear their families will hunt them down and kill them.
'I know they will kill her and I have to protect her,' Chachar said of his wife's family who are enraged that the young woman chose to marry a man from a rival tribe.
In certain sections of the traditional rural society in Pakistan, getting married without permission is deemed such a serious slight to the 'honour' of a family or a tribe that death is seen as fitting retribution.
Rights groups estimate 500 people, most of them women, are killed in the name of 'honour' in Pakistan every year, with the majority of victims from poor, rural families often killed by their own relatives.
Shortly after Chachar married Humera a year ago, the couple fled to Karachi from their home in Sindh province.
Humera, too afraid to talk to a reporter, had also been abducted by her family and Chachar was beaten by them.
Still defiant, they fear death if they stray too far from the cramped room next to the police canteen which they share with another young couple in the same position. They have been there for four months and they don't know when they can safely leave.
Under customs still followed in much of the countryside, a man or woman can be declared an outcast for choosing their own spouse.
The United Nations has estimated that some 5,000 people, mostly women, die every year in so-called honour killings, mostly in South Asia and the Middle East.
BAD SIGN
Traditionally, people in rural Pakistan have little confidence in, or access to, police and courts in big towns.
They solve problems through jirgas, or councils, of village elders.
But the councils are often manipulated by the powerful and become tools for sanctioning violence against the weak, often in the course of a dispute within an extended family over land or some other asset.
Women are the weakest of all in traditional, male-dominated societies so they are often targeted, rights groups say.
'Why does it happen? Because they are always the ones who have no redress, either legally or socially,' Anis Haroon, of the women's rights group the Aurat Foundation, said of the victims.
'They don't know anyone, they have no contacts, they have no money to offer the police. And these perpetrators come from the higher status of society,' she said.
Haroon said there could be no hope of change until legislators changed their mindset.
Most educated, urban Pakistanis abhor the violence and former president Pervez Musharraf took small steps to improve the lot of women. But change is painfully slow.
A senator from Balochistan province provoked outrage late last year when he said the killing of five women, who were reported to have been shot and buried alive in another case of honour killing, was a reflection of tribal traditions.
The senator, Sardar Israrullah Zehri, is now a minister in the federal government.
'It is a very bad sign ... people who are encouraging violence, their membership should be cancelled. They should not be allowed to contest elections,' Haroon said.
TIME FOR CHANGE
Orangzeb Magsi, a 32-year-old graduate from a US university, is a leader of one of the most powerful tribes in Balochistan.
Magsi has dealt with more than 100 cases of 'honour' crime in the past four years in his district but thankfully no killings, he says. Only education and time will bring change, he adds.
'On the one hand, you have these centuries old customs and on the other, the government says 'it's illegal',' Magsi said.
'Since they are not educated, it's very difficult to make them understand.'
Nafeesa Shah, a newly elected member of parliament from a rural area of Sindh province, said the jirgas and custom of killing women over honour reflected the failure of the judicial system.
'You had these customs in mediaeval Europe. You had the lynching of people in America ... These things will only go if you have laws that don't allow space for it,' Shah said.
Shah, a member of assassinated former prime minister Benazir Bhutto's Pakistan People's Party, said the party's victory in 2008 elections was a golden opportunity for change.
'It is important now that we, who are in power and can change things, take this as a sign of the times and work towards making laws and improving criminal procedures in a way that deters the offenders from protecting their crimes in the name of honour or customs,' she said.
Posted by Chief Editor at 4:43 PM No comments:

Email ThisBlogThis!Share to TwitterShare to FacebookShare to Pinterest
Labels: News

Eminent social personality, Abdus Sattar Edhi has left for Egypt for relief works in Gaza.Sources said that the eminent social celebrity and the founder of Edhi Foundation, Abdul Sattar Edhi along with Faisal Edhi has left here for Egypt, where he would buy medicines and other medical aids and carry it to the Palestinian Gaza for relief works among those wounded in the recent Israeli aggression.
It may be recalled that Abdul Sattar Edhi was earlier refused permission to enter into Palestine through Egypt’s Cairo border and he had to return to Pakistan, but now after having received the permission, he has left again.
Posted by Chief Editor at 3:55 PM No comments: