The Executive Committee of the Aligarh Muslim University Old Boys Association (AMUOBA) went into an emergency session at the AMUOBA Head Office in Karachi on April 7.

The meeting unanimously passed a resolution whereby Engr Muhammad Adil Usman, Senior Vice President, will take over the charge as President of AMUOBA and as the Chancellor of the Sir Syed University of Engineering & Technology (SSUET), Karachi, by virtue of this office.

The resolution will be effective with immediate effect as per provision of the Memorandum and Article of AMUOBA and the Act of the SSUET.

The meeting also passed a resolution condoling the sad demise of Engr Z A Nizami, the President of the AMUOBA and the Chancellor of the SSUET, who passed away in the early hours of April 7.

The meeting offered Dua-e-Magfarat and prayed to Almightily Allah to rest the departed soul in eternal peace and grant fortitude to the bereaved family to bear the irreparable loss.

Baba-e-Karachi Z A Nizami passes away 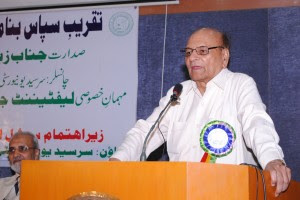 The man who gave a new development concept to the ever-sprawling city of Karachi breathed his last on April 7 at the age of 81.

Engr Z.A. Nizami, the Chancellor of the Sir Syed University of Engineering and Technology (SSUET), the President of the Aligarh Muslim University Old Boys Association (AMUOBA) and a former Director General of the defunct Karachi Development Authority (KDA), passed away after a brief illness.

Born on May 31, 1931 in Meerut, Engr Nizami has left behind five sons and a daughter besides grandsons and granddaughters to mourn his death. He lost his wife, a reputed short story writer, last year when she died in the US and was laid to rest in Washington on March 19, 2012.

Engr Nizami’s Namaz-e-Janaza was offered at Masjid-e-Umer near his Clifton residence while the burial took place at the Karachi Milk Plant graveyard in Gulshan-e-Iqbal.

The funeral and burial was largely attended by hundreds of his fans who included ministers, former elected representatives, bureaucrats, educationists, members of the civil society, members of AMUOBA and the officials and staff of the Sir Syed University of Engineering and Technology.

An acclaimed genius, Engr Nizami who rose from the position of an engineer to the office of Director General of KDA and steered the city of Karachi to new concepts of modernization having introduced 45 schemes which remained at the same number till his death as not a single new scheme was launched after his retirement.

He established this university on the land situated in the heart of Gulshan-e-Iqbal and with solo efforts also acquired 200 acres of land in the Education City.

Engr Nizami’s last official public appearance was at the SSUET’s 16thConvocation held on March 26 at the Karachi Expo Center where over 1100 passing out students were awarded degrees.

The last interview of Engr Nizami, done by this scribe, was widely published in print media just one day before the Convocation in which he spoke in detail about the progress achieved by SSUET in just 18 years and the future plans he had for it.

A remarkable and outstanding person, Engr Nizami had the reputation of being so considerate and sympathetic to poor people. He provided them jobs in SSUET to help them earn their livelihood.

He passionately promoted both academic and extra curricular activities at the university which won laurels nationally and internationally, particularly in the fields of sports, declamation contests and other social and cultural activities.

He remained the President of AMUOBA for seven consecutive terms and held the office of Chancellor of SSUET by virtue of this office ever since the university came into being.

“Who will now listen to our wows and grief and extend a helping hand,” said an unknown crying poor man.

“I was a newspaper hawker selling newspapers around Hotel Metropole and Mr Nizami made my son an engineer who is now earning handsomely in Dubai,” a weeping Iftikhar said.

Engr Nizami’s youngest son, Naveed, was in the US when he was informed about the worsening condition of his illustrious father. He dashed to Pakistan and met his father just four minutes before he expired. Engr Nizami saw his son, patted his hand and his eyes shut down for ever.

Meanwhile the soyem for the departed soul will be held on April 9 between Asr and Maghrib prayers at his Clifton residence.

The Sir Syed University of Engineering and Technology has announced a mourning session to pay homage to their late Chancellor at 10 am on April 8 and will close down after offering of fateha for the departed soul.