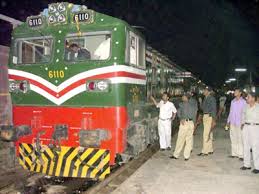 By Abdul Qadir Qureshi
(Pakistan News & Features Services)
In a massive drive against ticketless travellers in Karachi Division of the Pakistan Railways apprehended a record 11,205 passengers during the month of May 2015.
The drive was carried out by the Divisional Commercial Officer, Nasir Nazeer, on the directives of the Divisional Superintendent Engr Nisar Memon as a follow-up of instructions from the Federal Railways Minister, Khawaja Saad Rafiq, for rooting out the menace of ticketless traveling which was causing huge losses to the organization.
Accordingly, the DCO raided various trains and caught 11,205 ticketless passengers and recovered over Rs 10.008 million as fine and fare and deposited the same in the government exchequer.
It may be mentioned here that during April 2015, in a similar action, the DCO had apprehended 10,985 ticketless passengers and recovered over Rs 8,516 million,
It may be recalled here that in during an intensive checking carried out in August 2014, DCO Nasir Nazeer had recovered a record over Rs 17.1 million from passengers who were caught traveling without ticket.
According to the DCO, during May 2015, the trains raided to detect ticketless travelers included Awam Express, Pakistan Express, Allama Iqbal Express, Kara Koram Express and other trains.
Meanwhile, the Railways authorities have appreciated the performance of the young and energetic Divisional Commercial Officer with the directive that this campaign should continue with still greater intensification to curb the menace of ticketless traveling.

SSUET board meets on June 13

The Board of Governors of the Sir Syed University of Engineering &Technology (SSUET), Karachi, is scheduled to meet on June 13, under the chairmanship of Vice-Chancellor, Prof Dr Jawaid H. Rizvi.

The recommendations mainly concerned the courses of studies, Semester and admission rules for the purpose of inclusion in the prospectus for the academic year 2016.