‘Sindh Tenancy Act report to be presented in next assembly session’ 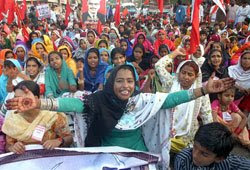 KARACHI: Sindh Assembly Deputy Speaker Shehla Raza assured the participants of the Sindh Hari Long March on Thursday that a report compiled by the last Sindh Assembly regarding certain changes in the Sindh Tenancy Act will be presented in the provincial assembly’s forthcoming session.

She made this announcement while addressing a gathering of hundreds of the long march participants outside the Sindh Assembly building. The participants, including women, reached the assembly building on the 12th day of their march. They had started their march from Hyderabad on February 15, under the banner of the South Asia Partnership Pakistan. The organisers of the march also handed over a memorandum to the deputy speaker, stating that they want changes in the Sindh Tenancy Act and the introduction of agricultural reforms.

Raza told the participants that a committee, constituted by the last provincial assembly, had compiled a report gauging certain changes in the Sindh Tenancy Act. However, she added that the committee had not been allowed to present the report in the provincial legislative house. According to her, PPP’s Anwar Maher had headed the committee; Maher is also a MPA in the present assembly.

Raza, who belongs to the ruling PPP, also found the gathering an opportunity to criticise the PML-N and justify the central government’s act of imposing governor rule in Punjab. She rejected PML-N’s criticism over the PPP government for not permitting the Punjab assembly session to be held, saying that today they are crying on this but they did not feel sorry when they restrained the Sindh Assembly members from holding its session in 1998.

Without naming the PML-N, the deputy speaker said that they are engaged in organising protest demonstrations on an decision taken as a result of a judicial order, however, she stated that they did nothing when their aeroplane was not allowed to land despite the court orders (during former president Pervez Musharraf’s tenure). She warned that the removal of memorial banners displayed in Punjab in the memory of PPP’s assassinated chairperson Benazir Bhutto will result in a strong reaction from PPP workers and supporters.