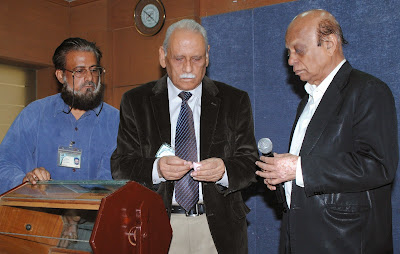 The Sir Syed University of Engineering & Technology (SSUET), Karachi, will bear expenses of four of its employees to be sent to the Holy land for performing Hajj this year.

The four lucky employees were selected for the sacred pilgrimage at the Hajj balloting held under the supervision of Vice Chancellor, Prof Dr Jawaid Hassan Rizvii while Registrar, Engr Syed Abrar Ali, conducted the ceremony.

The Vice Chancellor Prof. Dr. Jawaid Hassan Rizvi congratulated the four lucky employees having been declared successful in the balloting. He urged them that while in the Holy land, pray for the progress of the university, the country and the Muslim Ummah.
Posted by Chief Editor at 10:19 AM 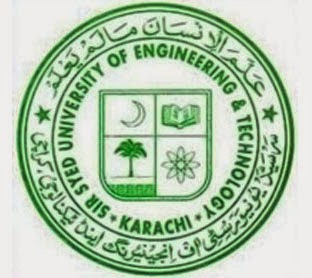 Preparations are in full swing for the 18th Convocation of the Sir Syed University of Engineering and Technology (SSUET), Karachi, to be held on March 14 at the Karachi Expo Center.
The arrangements for the coveted occasion were reviewed at a meeting held under the chairmanship of Vice Chancellor, Prof Dr Syed Jawaid H. Rizvi, and attended, among others, by Registrar, Engr Syed Abrar Ali, Dean of Engineering, and Chairpersons of various departments, Controller of Examination.
The Vice Chancellor  reviewed the arrangements, specially the security matters, besides administrative measures and issued necessary directives for holding the convocation in a befitting manner.
Dr Rizvi pointed out that the SSUET graduates were serving in various countries of the world on high and important positions and were engaged in making new breakthroughs, not only in Pakistan, but also in European, American and other continents.
He expressed his satisfaction that, since its inception, the SSUET has distinguished itself as a prestigious institution of the country dedicated to the promotion of science and technology.
Its degree programmes, he said,  are accredited by the Pakistan Engineering Council and the Higher Education Commission of Pakistan, and internationally it has full membership of Association of Commonwealth Universities, and the UNESCO sponsored International Association of Universities.
The Sir Syed University has collaboration with world famous universities like San-Jose and Johns Hopkins of USA and the University of Ottawa of Canada besides collaborating with three American and five leading British universities with students having the privilege of getting a degree from them, after studying in those Universities for only two years.

The Sindhi Community of Toronto and its surrounding cities celebrated Sindhi Language and Indus Civilization Day with full enthusiasm and spirit of Canada’s multiculturalism, by marking the International Mother Languages day. 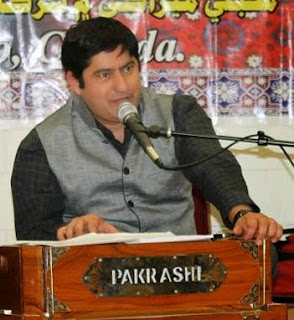 On this occasion the intellectuals and writers of different communities highlighted the significance of Sindhi culture, heritage and literature in Sindh language whereas the children presented musical tableaus and a Sindhi singer enthralled audiences with his live performance.

A prominent Canadian intellectual and political leader, Omer Latif, presented a paper titled ‘Sindh and Human Rights Issues’ in which he regretted that the heritage of Sindh, a centre of great civilization, has not been given due recognition.

Prominent poet of Urdu and Progressive Writers Forum Canada’s chairman Munir Perviaz Saami in his speech highlighted resilience and depth of Sindhi Literature. He noted that the Sindhi literature is rich with the spirit of resistance against tyranny and oppression and quoted Rumi a Persian iconic poet who in a well know verse recognized Sindhis as people of distinct culture and expression.

He added that at the same time the centuries old traditions of Sindhi literature are so deep that verse often less quote writers stand out as an evidence of that richness.

He shared the example from the poetry of Sachal Sarmast, Saami and Tanveer Abbasi which encompasses the human suffering, mutual pain, and resilience to readers to bold face all hegemony.

An intellectual and writer from USA Dr Tahir Qazi in his paper ‘Influence of Shah Latif and Sufism on Sindh’ observed that after reading Shah Abdul Latif Bhitai, one comes to know the real treasures of Sindh and Sindhi language.
On this occasion, renowned poetess of Sindhi and Urdu, Professor Azra Kandher, stated that Sindhi is among languages rich with literature, art and culture but this language has not been given due recognition yet.

She urged upon the elders of Sindhi community living away from their motherland to teach Sindhi to their youth so that they remain linked with their culture and heritage.

Professor Raza Ghaloo also addressed the gathering and elaborated the evolution of Sindhi and other languages. He suggested that Urdu was also funded in Jacobabad area of Sindh.

A senior leader of Sindhi community in North America, Abdul Razzaq Khushk, lauded the efforts of event’s organizers and appreciated the input and research work of other languages and communities intellectuals on Sindhi language and heritage through this event.

Another Sindhi community leader, Khair Mohammad Kolachi, also spoke and welcomed the participants of the event. 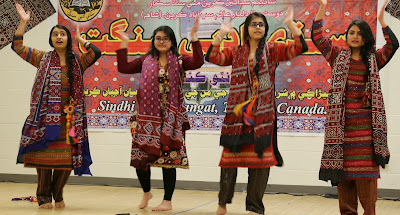 The Secretary Sindhi Adabi Sangat, Zulfiqar Shaikh, said that celebrating day of Sindhi language and heritage at world level is just to impart the world that Sindhi speaking people are moderate and against all sorts of extremism due to their rich literature and heritage of Indus civilization.

The Joint Secretary, Peetamber Lohano, also addressed the audience and welcomed the participants.

The most memorable side of this event was the performance of Sindhi vocalist, Jagdesh Bajaj, who sung popular Sindhi songs and Urdu ghazals lively, and the participants remained dancing in groups all the time.