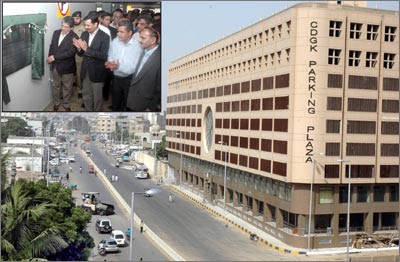 By Sohail Rab Khan
KARACHI: Governor of Sindh province Dr. Ishrat-ul-Ebad Khan and Karachi City Nazim Syed Mustafa Kamal inaugurated Pakistan’s first ever multi-storey CDGK Parking Plaza for vehicles in Saddar town yesterday.
Addressing the inaugural ceremony on this occasion Governor of Sindh Dr. Ishrat-ul-Ebad Khan congratulated citizens of Karachi for completion of the project and also praised the efforts of City Nazim Syed Mustafa Kamal and his team for performing unprecedented and extraordinary development works during the last four years in Karachi.
The Parking Plaza was built at a cost of Rs 650 million and has 11 floors altogether in which seven floors are reserved for parking, two floors consist of Shopping Plaza while remaining two are consist of basement. 700 cars and 500 motorcycles can be parked in the said plaza at a time while the parking charges are very nominal i.e. only Rupees 20 for first three hours and then Rs. 10 will be charged for one hour. It may be mentioned here that the Parking Plaza has been made fully computerized with surveillance, video cameras have been installed at all major locations and the building is also equipped with heavy elevators and standby generator.
Replying to a question regarding care-taker administrator, Ebad said it is not necessary that the care-taker administrator be a government man, he could be from any political party, he added
Earlier, speaking on the occasion, Nazim Karachi Syed Mustafa Kamal said that today is a good day for the public in Karachi and for all Pakistanis that Pakistan’s first ever car Parking Plaza has now been opened for public. He said that the City Government has made a plan under which the busy area of Saddar would be made pedestrian area on gradual basis.
Nazim Karachi said that with the completion of this project and development work around the CDGK Parking Plaza, the area of Saddar is now presenting a new and refreshing look.
He said that after the completion of corridor-III the motorists would have 18 kilometers of signal free journey from Saddar to Safora Goth, Malir Cantonment and even further 10 km to Tool Plaza at Superhighway. (NC Report)
Posted by Chief Editor at 5:04 PM No comments: