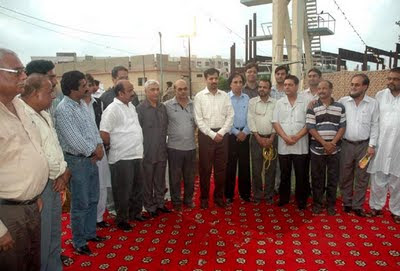 He expressed these views while talking to media representatives at the Iftar Dinner held by CDGK on Thursday.

Nazim Karachi said that concerned officers remained stayed on roads during rains while the lower staff despite of receiving salary for this job did not turned up which has created problems.
Replying another question Nazim Karachi said that the illegal hydrant mafia has been involved in cutting of trunk lines and selling it to consumers, therefore, it has now become necessary to save these trunk lines from hydrant mafia.

He expressed apprehension that in case of any non cooperation from police and rangers in the closure of illegal water business, it would be hard for water board to supply water to citizens.

Nazim Karachi said that citizens should own their city and abide by civic and traffic rules.
He further said that in all over the world people slash prizes of utilities on religious occasions while here we tends to increase the prizes of daily used items in Ramadan.

On another query, the City Nazim said that government doesn’t want to make anyone home less but it only does it in the larger interest of the city and its citizens. It has become essential to remove the encroachments from Gujjar Nullah and other major drains of the city otherwise the citizens would have to face much trouble in future. He said that no one can have valid lease of the property constructed on the land originally earmarked for Nullah. Despite of this we have made a policy under which and all the owners of such property would get 80 sq yards plot and 50 thousand rupees as compensation

Posted by Chief Editor at 11:31 PM No comments: Links to this post