BELIEVED TO BE MARRIOT BLAST MASTERMIND 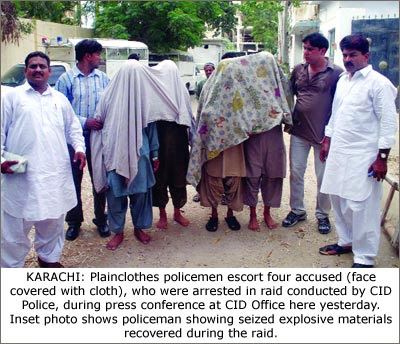 KARACHI: The CID police arrested a local al-Qaeda leader and his three accomplices here yesterday. The police also seized a large cache of arms and ammunition from their possession.
According to the details gathered from police sources said that four of their associates succeeded to flee from the scene.
According to CID officials, the police, on receiving a tip-off, raided a house in Model Colony where a meeting of the banned religious organizations was underway.
The police detained four accused, Muhammad Anwar, Rehan, Azeem and Ghulam Haider. While their four accomplices, Jehangir, Saifullah, Azam and Misbahuddin, managed to escape.
The police recovered 50-kg explosive material, 22kg sulphur powder, 35 gallon nitric acid, 100 meter detonating role, two Kalashnikovs, 2 TT pistols, 25 timer devices and more than 1000 capacitors.
The CID officials told that the accused Muhammad Anwar is a local commander of al-Qaeda and also an incharge of a banned religious outfit.
The accused is believed to be the mastermind of Marriot blast. (National Courier Report)
Posted by Chief Editor at 4:23 PM No comments: Links to this post