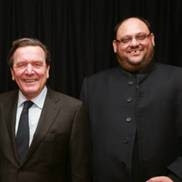 Arif Bukhari apprised the German Chancellor about the successful implementation of the FATA Children Scholarship Programme that was run by the KASB Foundation with the support of the German Foreign Office to educate the children who were displaced because of the violence in the FATA region.

Realizing the importance of Pakistan, which will serve as the transit point in the new business order of the world to connect the Middle East, Afghanistan and the former Soviet Bloc countries, East Asia and more importantly China with the rest of the world, Chancellor Schroeder looked forward to the timely development of infrastructure in Pakistan to meet the challenges that would have to be met for the prosperity of Pakistan in particular and the South Asian Region in general.

Arif Bukhari, who is also the Chairman of the Pakistan China Business, Cultural and Social Society, which serves to develop the social-cultural, economic and people to people contacts between Pakistan and China, invited Chancellor Schroeder on behalf of the society to visit Pakistan as a special guest speaker to inform its members about the vision he holds for the South Asian Region and the supportive role he could play on behalf of his country to which the Chancellor responded that he looked forward to do so whenever the right opportune allowed him to visit Pakistan.

The German Ambassador to Pakistan, Dr Michael Koch, having taken very keen interest in the running of the FATA Children Scholarship Programme, was also appreciative of the KASB Foundation initiative.
Posted by Chief Editor at 12:33 AM 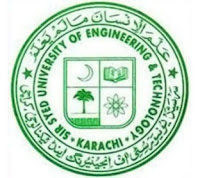 The Convocation-2013 of the Sir Syed University of Engineering and Technology (SSUET), Karachi, will be held on March 26 at the Karachi Expo Centre.

The arrangements for the 16th convocation were reviewed at a meeting chaired by Chancellor Engr Z A Nizami and attended, among others, by Vice-Chancellor Prof Dr Jawed Rizvi, Registrar Shah Mahmood Hussain Syed, Engineering Consultant Mohammed Shafique, Director Finance and other officials.

It was informed that this year about 1000 students including those graduating in Masters will be receiving their degrees in the disciplines of Computer, Electronics, Civil, Bio-Medical and Telecom engineering besides Computer Science.

The Vice-Chancellor stated that all the final year results have been compiled and the University’s Board of Governors will meet on March 25 prior to the convocation.

In the meeting, the Chancellor also reviewed the Admissions-2013 process and was informed that it was completed and now regular classes were being held.