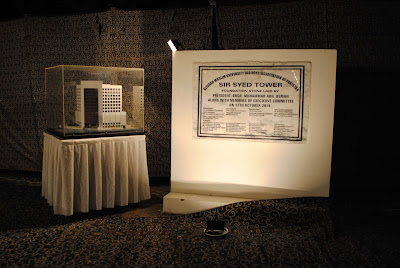 
Glowing tributes were paid to the great reformer, educationist and the guide of the Muslims of South Asia on the occasion of the Sir Syed Day which was observed with traditional fervour in Karachi.

Eminent speakers, on the occasion, highlighted various aspects of the life of the legendary Sir Syed Ahmed Khan and recounted his achievements in particularly the contribution and efforts towards the emancipation of the Muslims of South Asia by way of creating an awareness about their identity.

Held under the auspices of the Aligarh Muslim University Old Boys Association (AMUOBA), the sponsors of the Sir Syed University of Engineering and Technology (SSUET), the proceedings of the day were chaired by Engr Mohammed Adil Usman, President, AMUOBA, and Chancellor, SSUET.

They reminded of the various aspects of the life of the great reformer and enlightened the audience with his achievements with the assertion that it was high time to follow his mission with the spirit he had created among the Muslims of that era and which led to their independence from the yoke of imperialists. 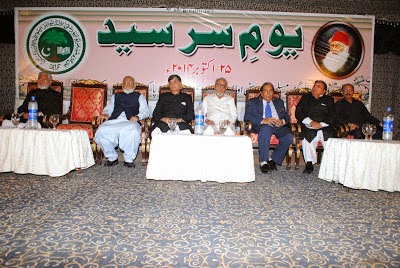 In his presidential address, Engr Adil Usman observed that Sir Syed had launched the Aligarh Movement to raise the educational and mental level of the Muslims and improve their economic bits.

"He championed the cause that Muslims must secure scientific knowledge and have their own educational institutions and the AMUOBA takes the pride that while persuading the mission of Sir Syed, it established the Sir Syed University of Engineering and Technology and Aligarh Institute of Technology where best facilities have been provided for dispensing modern scientific knowledge," the AMUOBA President stated.

He said that the educational thinking and the mission undertaken thereof by Sir Syed were undeniable in their significance and the present day era and its needs demanded in following the footsteps of the great leader in its real spirit.

On the occasion, he particularly referred to the construction of multi-storeyed Sir Syed Tower on AMUOBA’s plot and described the same as an accomplishment towards fulfillment of Sir Syed’s mission.

He specially recalled the contribution of late Chancellor Engr Z A Nizami and the late Zakir Ali Khan, having served the AMUOBA as President and Secretary General respectively, towards conceiving this stupendous project. 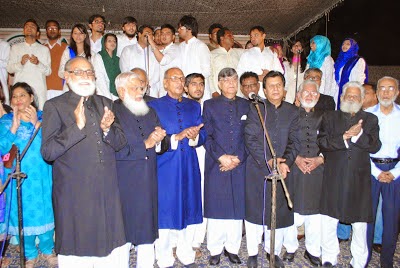 Engr Adil Usman sought the support and help of all and sundry at every step towards the completion of this gorgeous project . He pointed out that whatever funds AMUOBA had with it, were allocated for this project which, however, need more funds required for the project of this size.

He also informed that work on the Engr Z A Nizami Block at the SSUET was in the final stages of completion while the present university management introduced four new technologies with funding from its own resources.

Earlier in his discourse Syed Safwanullah said that it’s high time to ponder whether the message which Sir Syed left 150 years back, still exist to be pursued by us and what we are leaving behind for the next generation.

“We should look into our own hearts to see whether we did follow the course provided by the great educationist or or we should leave them on smaller arteries to move ahead.”

Prof Dr Waqar Azeem while unfolding various aspects of the life of Sir Syed, said that he spent whole of his life in reforming the Muslims and proved himself as an epoch-making personality who brought an opinion-making revolution which was his unmatched achievement.

He said that Sir Syed had made Urdu a simple language and translated some 40 books on scientific subjects from English into Urdu. He said he brought out a gazette publishing scientific matters and it continued to be published for 30 years.

Prof Sehar Ansari said that the wisdom and mission demonstrated by Sir Syed finds no other figure in the sub-continent which may match his towering personality.

Prof Anwar Ahmed Zai remarked said that Sir Syed raised an army of his followers whose influence can be felt in the boys and girl students even of today. 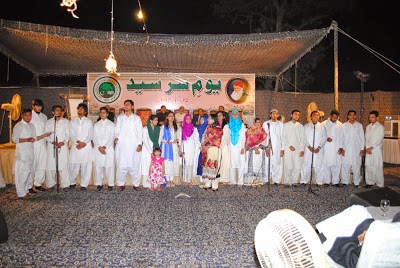 He pointed out that only three years later, the nation will celebrate the 200th birth anniversary of the great reformer who taught the lesson of independence 150 years back while focusing on the need for acquiring and learning English and scientific knowledge.

The proceedings concluded with the famous Tarana-e-Aligarh which infused warmth in the blood of audience who stood up in zeal and sung the same in unison with the group of SSUET’s boys and girls.

The function was organized at the same venue where the foundation stone of the multi-million Sir Syed Tower was laid by the AMUOBA President, Engr Adil Usman, who is also the Chancellor of SSUET, a week earlier.
Posted by Chief Editor at 1:15 PM