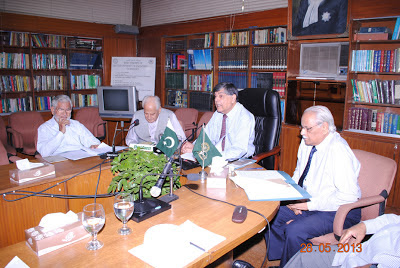 The Chancellor of the Sir Syed University of Engineering & Technology (SSUET), , Engr Muhammad Adil Usman, has said that changes depend on values and morals, and character is the magic component that makes someone unique among the contemporaries.

“Each of us has the ability and potential to develop and strengthen our character that, of course, ensures the success in life”, he said while speaking at a reception hosted for visiting senior Aligarian Brig (Rtd) Iqbal Shafi at the SSUET campus.

Focusing on the importance of character building, the Chancellor pointed out that character is an amalgam of many qualities like honesty, integrity, dependability, diligence, loyalty, compassion, sincerity, attentiveness, determination and confidence.

“Good character is when your head, heart, soul and hands agree to do the right thing, in the right way, for the right reasons and the combined effort gets the right results in the midst of the most adverse conditions,” he elaborated.

Chancellor Adil Usman reckoned that education without character is like a flower without fragrance and education isn’t mere textbook knowledge.

“As a matter of fact education in the true sense has a great role to play in shaping ones personality and character. Let a student learn thoroughly whatever he may learn and let his conduct be worthy of his learning,” he stated.

He was of the view that the students should give top priority to education which necessarily builds their character. Following the thought and vision of the great educationist Sir Syed Ahmed Khan, the students of the SSUET are promoting the spirit throughout the world, he added.

Speaking on the occasion the visiting Aligarhian Brig. (Rtd) Iqbal Shafi emphasized the need for character building  for true development of the country, and  which is totally ignored in our country with no one give importance to it.

“We have nearly 177 universities in but none of the university has any inclusive and comprehensive plan for character building of their students. Our universities are producing employees, professionals but no leaders. We have failed to produce leadership so far in the country,” he regretted.

Observing that lacks actual democracy, Brig Iqbal Shafi said charter of or Meesaq-e-Medina was the 1st written agreement in the history of world. After emigration to Medina, Prophet Muhammad (SAWW) drafted the Charter of Medina, establishing a kind of alliance or federation among the eight Medinan tribes and Muslim emigrants from Mecca, which specified the rights and duties of all citizens and the relationship of the different communities in Medina including that of the Muslim community to other communities, specifically the Jews and other.

“The Charter of Medina reveals the Holy Prophet’s great diplomatic skills, as it instituted a number of rights and responsibilities for the Muslim, Jewish, Christian and other communities of bringing them within the fold of one community-the Ummah,” he stated.

Brig Iqbal Shafi informed that he got the charter for , , having affiliation with the . He said that, in addition to BBA, they were planning to start M.Ed and B.Ed courses in near future.

It may be pointed out here that Brig Iqbal Shafi was awarded Sitara-e-Imtiaz (Military) for his commendable services in Army. He also received Tehreek-e-Pakistan Gold Medal for his valuable services during Pakistan Movement. He is qualified in Chinese language.

He was posted as Head of Military Mission to from 1974 till 1976. He has been Honorary President of Pakistan-China Friendship. He worked as Director Aga Khan Foundation for 12 years. He is the President of Sir Syed Society, and also Chancellor-designate, ,

The ceremony, attended by members of AMUOBA and oothers, concluded with a vote of thanks proposed by SSUET’s Vice Chancellor Prof. Dr Syed Jawaid Hassan Rizvi .
Posted by Chief Editor at 4:19 PM