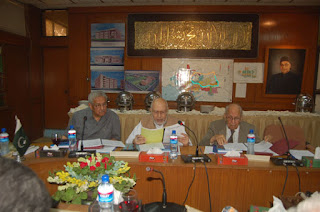 By Abdul Qadir Qureshi
A surplus Rs 817 million budget of Sir Syed University of Engineering and Technology, (SSUET), Karachi, for the fiscal 2012-2013 was passed at a meeting of the University’s Board of Governors held under the chairmanship of Vice-Chancellor Prof Dr Jawaid Hasan  Rizvi on June 23.
In the budget the University announced a 20 percent increase in the salaries of its employees while it showed Rs 815 million as current expenditure for the next fiscal.
The budget shows Rs 816.89 million as current income and Rs 814.27 million as current expenditure thus making it surplus by Rs 2.63 million.
According to the salient features, the university will spend Rs 100.52 million on development, Rs 37.6 million on the purchase of additional equipment for laboratories in all the Faculties including newly established Telecom Faculty.
Besides, Rs 16.5 million has been earmarked for financial help to deserving students and staff. The help will come out of profits on Endowment Fund, while Rs 23.45 million would be spent on construction of new academic block and Rs 9 million for development of New Campus/IT Park at its 200 acres of land in the upcoming Education City. 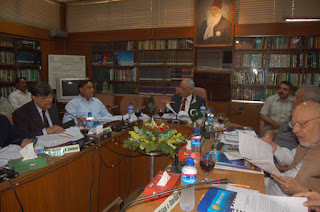 The university has earmarked Rs 1.5 million for research projects, Rs 6 million for research by faculty, Rs 1.6 million for PhD Graduate Program while Rs 3 million has been set aside for purchase of new books, research journals and equipment for its library.
As per budget documents some 10,818 students had been awarded degrees in six different engineering disciplines since 1998 to date
This year, the university allocated Rs 16.5 million for development fund and the accumulated Fund now stands at Rs 88.1 million. The Endowment Fund which was established with an amount of Rs 250 million in 2006 has now soared to Rs 310 million.


The Board also approved the proposition of Academic Council according to which syllabus has been amended with respect to the present demands and modern trends.
The Board meeting was attended, among others, by Lt. Gen. (Rtd) Moinuddin Haider, Dr Abdul Qadeer Khan, Prof. Dr. M.D. Shami, Justice Fazl-e-Ghani Khan, Engr. Muhammad Adil Usman and Cdre (Rtd) Salim A. Siddiqui.
Posted by Chief Editor at 11:55 PM