By Abdul Qadir Qureshi
(Pakistan News & Features Services)
The Chief Secretary, Sindh, Mohammad Siddique Memon, called on the Provincial Ombudsman, Sindh, Asad Ashraf Malik at his office and discussed matters of mutual interest.
The Sindh Ombudsman, Asad Ashraf Malik apprised the Chief Secretary about functioning of the Mohtasib office and improvements brought about for providing speedy justice to aggrieved people at their doorsteps.
He urged the Chief Secretary to direct all the provincial departments for implementation of decisions of Ombudsman on priority basis so that administrative justice was provided to the people of Sindh.
The Chief Secretary assured every possible help and assistance for implementation of the Sindh Ombudsman decisions at the earliest. He said that he will issue instructions in this regard in the next meeting of secretaries.
Posted by Chief Editor at 4:05 PM Links to this post

Witnesses Protection Act to be implemented 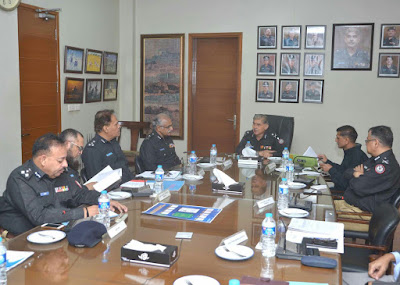 The measures for implementation of Witnesses Protection Act (WPA) came under discussion at a high level meeting held under the chairmanship of IG Police Sindh, Ghulam Haider Jamali.

The Additional IG CTD, while spelling out the spirit of WPA, highlighted its significance in the existing scenario.

It was decided to establish the Witness Protection Unit (WPU) to be headed by Addl. IG CTD, as required under the Act while the provincial home department will be approached to actualize the physical establishment of WPU.

"Till the physical functioning of WPU, it is imperative to convey to Additional IG Karachi and all Range DIGs to ensure protection to witnesses, particularly those connected with high profile cases as an immediate measure and in ordinance with the spirit of WPA," the IGP directed

IGP Jamali constituted a committee under Addl. IG CTD with DIG Headquarters and DIG Administration, Karachi Police and SSP CTD Aamir Farooqi as Secretary of the committee, to frame rules for WPU's working at the earliest.
Posted by Chief Editor at 3:29 PM Links to this post 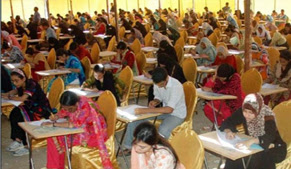 Around 4000 candidates appeared in the entry test for admissions in the academic year 2016 of the Sir Syed University of Engineering and Technology (SSUET) which was held under strict security measures at the Karachi Expo Centre.

The two-hour test commenced at the designated time of 10 am. and among the candidates were applicants coming from as far as Gilgit, Baltistan and Azad Kashmir besides other parts of the four provinces.

The SSUET Chancellor, Engr Mohammad Adil Usman, visited the examination centre and had an appraisal of the arrangements made from the concerned officials.

Talking to media on the occasion, Engr Adil Usman remarked that the university prepared future professionals for the competitive world equipped with extraordinary skills and outstanding abilities.

“The university has established itself as a globally recognized institution of of academic excellence with career focused education,” the Chancellor said and pointed out that the SSUET prided itself for having the best and brightest faculty committed to international standards.

On the occasion, Vice Chancellor Prof Dr Syed Jawaid Hassan Rizvi informed that. keeping pace with the new emerging trends, the university has introduced new technologies to meet the ever increasing market demands.

It may be mentioned here that SSUET is offering admissions in 10 engineering disciplines including computer, electronics, civil, telecommunication, bio-medical, software engineering besides computer science and architecture.
Posted by Chief Editor at 2:51 PM Links to this post

The Sir Syed University of Engineering & Technology, (SSUET), Karachi, in collaboration with the Mohabban-e-Bhopal, organized a national song competition with the participants from the various academic institutions having been divided into two different age groups.

Addressing the ceremony, Engr Mohammad Adil Usman, Chancellor SSUET, described the competition most inspiring, reflective of deep rooted patriotism, adding that it promoted a sense of national pride and unity and providing an opportunity of peeping into our history, traditions and our cultural diversity.

“Apart from infusing a spirit of national inspiration, the national songs call upon us to fulfill our responsibilities to lead our country towards prosperity and economic stability. These songs spark our feelings towards solidarity and commitment portraying country’s ideological meanings,” the Chancellor acknowledged.

Appreciating the talent of students, Chancellor Adil Usman remarked that the Aligarh Muslim University Old Boys’ Association (AMUOBA) was the true successor of Sir Syed Ahmed Khan’s educational movement and its members feel themselves bound to promote technical education in the country with patriotic zeal.

Speaking on the occasion Qamar un Nisa Qamar, a former MNA, wished Pakistan to be an exemplary model of solidarity and unity with high moral values. Meanwhile Zafar Ramay enthralled the audience with his beautiful songs.
Posted by Chief Editor at 2:34 PM Links to this post 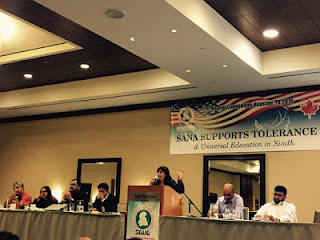 By Abdul Qadir Qureshi
(Pakistan News & Features Services)
The 31st Annual Convention of the Sindhi Association of North America (SANA), spanning over three days, was held recently in Houston, Texas. The moot was largely participated by literary and political personalities from all over the world. Around 600 families participated in the latest SANA event.
The leaders of North American Sindhi origin renewed their commitment to contribute positively to boost the image of their country and Sindh at the world level and serve the motherland with complete dedication.
On the concluding day, a general body meeting of SANA was held in which the central President Jamil Daudi, General Secretary, Noorunissa Ghanghro, Vice President, Canada, Maqsood Soomro, Vice-President, Youth Wing, Bakhtawar Hafiz, and Treasurer, Ali Hassan Bhutto, apprised the members about one year progress report.
On this occasion Zafar Agha presented progress report of SANA Fame Fund scholarships being given to deserving and poor students of Sindh for completion of their education.
The SANA decided to increase the number of scholarships to maximize the opportunities of quality education for the youth of Sindh.
The Sindh Skill Development project was also discussed under which the educated youth are extended job oriented skill development along with opportunities of employment overseas. Sohail Ansari presented report on Thar Potable Water project.
On the last day various sessions and panel discussions were arranged in which the SANA decided to connect the youth of North America and Sindh through social media for knowledge sharing and each other's professional buildup. 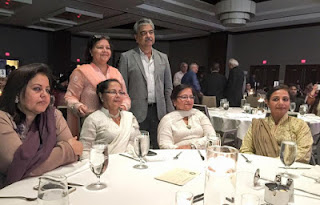 Need was stressed to teach Sindhi to the young generation of North American Sindhi families so that they were kept connected with their culture and heritage.
A seminar on health issues like high blood pressure, diabetes, and depression among youth was also arranged by Dr Hafeez Abbasi.
Another important session was a debate in which renowned intellectual, educationist and author Aaqil Shah spoke about the major issues of Pakistan.
The concluding session recognized volunteers and local organizers with the presentation of Life Time Achievement awards to world renowned vocalist Abida Parveen.
The Consul General of Pakistan in Houston, Afzal Mahmood, also spoke to the gathering and appreciated the activism of Sindhi community of USA and particularly in Texas to improve the image of Pakistan in this society.
On the occasion the artists coming from Pakistan, Humaira Channa and Shaman Ali Mirali, rocked the event with their famous songs and mesmerized the audiences who dances on their songs with great enthusiasm.
On the second day of event a political session was also arranged to discuss the real issues of Sindh and Pakistan which was addressed by Ayaz Latif Palijo, Mahtab Akbar Rashidi, Zulfiqar Halepoto, Mohammad Ali Mahar and Lakhu Lohano.
A session on Information Technology was also arranged in which experts including ex-President SANA, Iqbal Tareen, apprised young generation about the opportunities ofemployment and entrepreneurship in the field of IT.
A literary gathering was addressed by distinguished laureates and literates from Sindh including ex-chairperson Sindhi Language Authority, Dr Fahmida Hussain, noted drama and story writer Noorul Huda Shah, noted poet Aakash Ansari, Secretary General of Sindhi Literary Association Dr Mushtaq Phull, Professor Mukhtiar Samu, Dr Saleem Memon and others.
A session on education was addressed by noted educationist Syed Rasool Bux Shah, Saleem Memon, Asghar Soomro, Aijaz Turk and others.
The noted heads of media houses in Pakistan including chief of Hum TV, Sultana Siddiqui, head of Sindh TV, Dr Karim Rajper, head of Mehran TV, Ghulam Nabi Morai and noted columnist Asghar Soomro spoke on “The Role of Media" in an egalitarian society in Pakistan which was moderated by Khair Mohammad Kolachi.
On the opening day, a session was dedicated to discuss the issues of Sindhi women. Mahtab  Akber Rashidi, Noorul Huda Shah, Dr Fahmida Hussain, Sultana Siddiqui, Nicolita Talpur, and General Secretary SANA, Noorunissa Ghanghro, regretted that even in this era of computer and information technology, a huge majority of Sindhi women are living without basic rights and looks still living in a stone age.
The speakers urged the educated people of Sindh to provide maximum opportunities of education, health and employment to their daughters and womenfolk without which no society can survive and compete to the global challenges.

Posted by Chief Editor at 6:10 PM Links to this post

He pointed out that the SSUET was the first university to have introduced the discipline of biomedical engineering in Pakistan in 1996 and since its inception around 1,800 students have secured their future as biomedical engineers with dynamic career growth in the country and abroad.

The chancellor reckoned that biomedical engineering was a research oriented branch which certainly was a new but a promising career option, involving study of all types of engineering ranging from electronics, computers, mechanical, chemical and nanotechnology.

“Biomedical engineering definitely offers growth opportunities if you have got some experience with you,” he added.

Engr Abdul Muqeet and Engr Mohammad Junaid Khan also spoke on the occasion. The SSUET registrar, Engr Syed Abrar Ali, also shared his views with the audience. Later the Chancellor presented the souvenirs to the guests and distributed certificates to the students.
Posted by Chief Editor at 3:14 PM Links to this post

By Abdul Qadir Qureshi
(Pakistan News & Features Services)
The process for admissions 2016 has started at the Sir Syed University of Engineering and Technology, Karachi, (SSUET) with the distribution of prospectus and model test papers.
According to a SSUET announcement, the students desiring admission in SSUET can submit applications till September 8, the last date for the purpose.
The entry test has been scheduled to take place on September 20 for which arrangements have been made at the Karachi Expo Centre.
This year the university will be offering admissions in ten different technologies which include computer, civil, bio-medical, electronics, electrical  and telecommunication engineering besides computer science, software engineering, bio-informatics and architecture.
As per schedule, published in the prospectus, regular classes for the new academic session will commence from second week of January 2016.
Posted by Chief Editor at 2:58 PM Links to this post