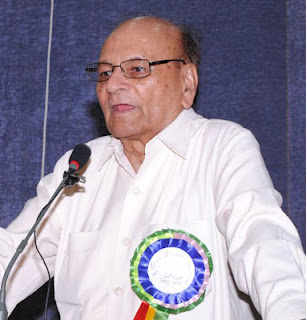 Various facets of the life and achievements of the late Engr Z A Nizami were highlighted at a condolence meeting organized by the KDA Officers Club Association.

The meeting, chaired by Commissioner Karachi, Shoaib Ahmad Siddiqui, was held in the newly constructed Club’s hall named after Engr Z A Nizami.

The speakers, who included two former Director Generals of the Karachi Developing Authority (KDA), paid glowing tributes to Engr Nizami for his vision and above every thing else his relationship with humanity.

In his speech, Commissioner Shoaib Siddiqi said that living nations do not forget their benefactors and Engr Nizami is one of them. He said the condolence references organized for the departed soul fully endorses that his memory in hearts will always remain alive.

He said that Engr Nizami was a person whose dictionary was without the word “No” and that was why he earned prayers of people in thousands having earned their prayers not only when he was the Director General of KDA but also when he became the Chancellor of the Sir Syed University of Engineering & Technology (SSUET).

Shoaib Siddiqi said that when people retire from their position, they are generally not remembered but in the case of Engr Nizami there was a difference  as he always remembered those who worked under him in KDA and kept resolving their problems.

He said that it was his management skill which earned KDA a unique place in the comity of development authorities throughout Pakistan and led Karachi to an unprecedented path of progress and development.

He said although Engr Nizami was no more with us but spiritually he will always remain in our hearts.

Speaking on the occasion Shah Mohammad Misbah, an ex DG KDA remarked that achievements made by late Engr Nizami will remain unmatched, particularly when it will be the question of either modern development or education.

He said that he was the true emancipator of poor and middle class people and he earned their immortal good wishes and prayers by providing them a roof to live under.

Sabahat Ali Khan, another former KDA DG said that hours will be required to recount the achievements of Engr Nizami but one of his biggest achievement in the development sector was construction of 10,000 quarters in Korangi in just six months.

He recalled that KDA had become bankrupt in 1980 but it witnessed a major turn around when Engr Nizami took over and emergence of Civic Centre, KDA Club and KDA Officer’s Housing Society were classical examples.

Rauf Akhtar Farooqui, a former Chief Controller of Buildings, said that late Engr Nizami was one of those big personalities whom we can call as a “great man” in real sense. He described Engr Nizami having extraordinary achievements to his credit.

Besides being a world class Town Planner Engr Nizami brought a revolution  in the field of education and established the biggest private sector engineering university which today stands as a symbol of his wisdom.

Mohammed Zakir, who served as Director Land in KDA and later became DG of Quetta Development Authority, described the departure of Mr Nizami a colossal loss for this city.

Farrukh Nizami, son of Engr Nizami informed that during his tenures of Director General, KDA, and Chancellor, SSUET, the two organizations were visited almost every head of the state and top functionaries of the Government of Pakistan.

Rizwan Siddiqi, a former Director Public Relations in KDA, who conducted the proceedings, said that Engr Nizami was a true benefactor of poors and he was earning their prayers even today.

Earlier Sultan Ahmed, Secretary of the Association welcomed the guests and said that this newly constructed hall has been named after Engr Nizami who was the founder of this club. The meeting concluded with offering of fateha for the departed soul.