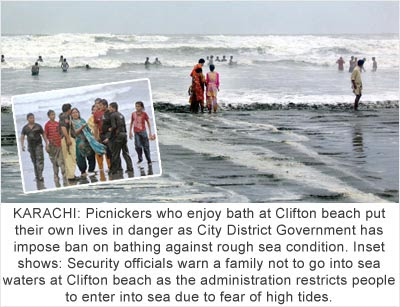 People have been warned by the Governor of Sindh Dr. Eshrat ul Ebad yesterday to avoid bathing in the water with high tides and thus protect their lives from impending dangers due to likely water onslaughts in the city. Fishermen in particular have also been particularly cautioned to avoid their daily, routine fishing during high tides in next couple of days.
Dr Ishrat-ul-Ebad Khan yesterday directed all relevant departments to apprise the people living along coastal areas of Sindh about the expected thunderstorm and take immediate precautionary steps to shift these people to safer areas. In a statement, the governor said that fishermen should be halted from sailing into the sea during the next 24 hours in view of storm threat.
At the same time, the government has also taken steps to ensure that any damage is kept restricted and as minimum as possible in case of tempestuous directions due to high water tides being expected and that may play havoc with anything near its wild journey.
Meanwhile, Sindh Minister for Health Dr. Sagheer Ahmed yesterday directed all Executive District Officers (Health) of the province to be alert and ready for any emergency due to forecast of heavy rain and rough sea.
In a directive issued to all EDOs (Health), Provincial Health Minister ordered ensuring availability of required doctors, staff, medicines and lifesaving drugs to cope with any natural calamity.
Emergency should be declared in health institutions, especially of Karachi, Thatta and Badin, which are more likely to be affected from extreme weather, said a handout.
Dr. Sagheer Ahmed said that EDOs should be in constant contact with their respective local governments, so as to provide immediate healthcare facilities to the affected people. Coordinated efforts with provincial disaster management authority should also be ensured to provide relief to affectees, he further directed.
He also directed EDOs (Health) Karachi, Thatta, and Badin to establish medical camps in the coastal areas with the provision of ambulance.
He warned that no negligence would be tolerated in this regard. (NC Report)
Posted by Chief Editor at 5:11 PM No comments: Links to this post