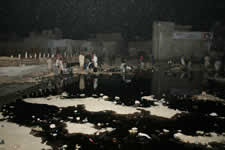 KARACHI: A Pak Arab Refinery Company (PARCO) oil pipeline burst in the Korangi residential area on Wednesday evening, creating panic amongst and problems for residents. The incident occurred around 6:45 pm when a Sui Southern Gas Company (SSGC) team was doing repair work and accidentally hit an oil pipeline causing it to crack. An approximately 90-feet high fountain of oil erupted from the pipeline, residents claimed. Soon, oil spread all over the residential area and the houses and it kept spewing for nearly two hours.Heavy contingents of police and Rangers arrived at the scene and secured the area.
The PARCO crew, local administration, fire brigade department and ambulances from different welfare associations also arrived at the scene. At least 300 people participated in the rescue work. It is pertinent to mention here that, at least, one thousand houses are located in the area and around 500 houses were completely affected by the incident. The houses were deep in, at least, 10 inches of oil. The area’s power supply was cut off in view of any possible outburst of intense conflagration. Announcements are being made for people to strictly avoid lighting matches, stoves, cigarettes, lighters or candles. The 800 kilometer long pipeline from Korangi in Karachi to Muzaffar Gardh was crushed some 1.5 inch during the repair work. It is believed that PARCO has suffered a great loss with the waste of hundreds of liters of oil. According to PARCO officials, oil supply through the damaged line was immediately stopped but they could not predict how long it will take to repair the line.
The residents of the area, with the help of rescue teams, were shifted to safer places and people moving towards the site were stopped from accessing the affected area. The residents of the area claimed that spilled oil has made its way into their houses. “SSGC staffers are responsible for this,” said DSP Fakharul Islam. “They mistakenly hit the oil pipeline causing it to burst.” Sources revealed that taking strict notice, the Sindh government decided that the incident is a result of the negligence and carelessness of the SSCG team and warned them that strict actions will be taken against them, including fines.
The local administration of the area urged on immediately starting relief activities, as the fierce gale forced the oil to spread all over the area. The administration stated that nobody took the city government’s permission before starting the repair work, which involved excavation, they added, calling for the registration of an FIR against those responsible. All roads leading to the affected site have been blocked, causing massive traffic jams on Korangi-bound roads. Heavy machineries were called for and work of dumping sand on the spilled oil has been started. CDGK has called scores of trucks loaded with clay to remove the lubricant from the roads and an inquiry committee has been formed to probe the case, as the SSGC is being accused.
SSGC Media Relations Manager Inayatullah Ismail told that the crew was engaged in the installation of a Town Border Station when the incident occurred. According to him, the incident was not necessarily caused due to the SSGC team’s actions, stating that it is possible that the pipeline burst due to an increase in pressure or any other technical fault. Explaining why the SSGC did not obtain permission from the CDGK, he said that, since the team was not damaging the road, permission was not necessary. “All this confusion can only be cleared after the completion of rescue work,” said Ismail.
Posted by Chief Editor at 2:40 PM No comments: Links to this post