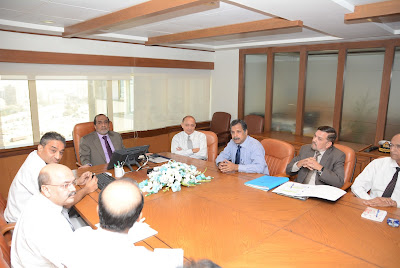 The Pakistan National Shipping Corporation (PNSC), with the collaboration of the Pakistan Marine Academy (PMA), is considering providing more employment opportunities to the PMA cadets.

In this connection a high level joint meeting of both the organizations was held with the senior officials in attendance. Arif Elahi, Chairman, PNSC, and Commodore Syed Akber Naqi, Commandant, PMA, headed their respective delegations.

The meeting constituted a three-member committee headed by Brig Rashid Siddiqui and comprising of Zaheer Baber and the Commandant, Marine Academy, as its members.

The committee has been assigned to the task of developing a new recruitment system for the PMA cadets, with the cooperation of DG Ports and Shipping.

The meeting decided that a conference of private marine training institutes and the heads of Merchant Navy organizations will soon be convened.

It was also suggested that the private shipping companies be persuaded to provide employment to the PMA cadets, the number of cadets who sign on and sign off on the PNSC ships be raised from 18 to 30. These cadets may also be provided employment at harbor crafts and harbor rovers.

It was  decided that during training these cadets will be paid scholarship (stipend) sponsored by the PNSC. The committee considered awarding scholarship of Rs one lac per head to the five position holder cadets of the PMA. The PNSC has offered financial assistance for upgrading physics and chemistry labs of the PMA.

It was also decided that only those institutions having ample experience of shipping would be allowed to impart training so that the practice of awarding certificate without any training is to discourage and brought to end. A committee comprising of the PNSC shipping experts would redesign the syllabus.

The PNSC Chairman emphasized that the regulatory authority be reactivated particularly in the matters concerning the PMA. He also stated that he will get this matter investigated as to why the PMA cadets were not getting employment on foreign vessels.

Gulino, speaking on the topic of visa policy and procedure, provided the attendants with the details regarding obtaining US visa and told them that one doesn’t have to face any undue delay or difficulty if he or she has a machine readable passport, SSB and is registered at the agent.

“The applicants have to face difficulty if they lack the eligibility, don’t follow the standard procedure, provide invalid or incomplete documents or fail to provide required information,” he explained.

The representatives of shipping companies requested that the procedure be made easier, some regulations should be relaxed and undue delay in issuance of visa be done away with. Speaking to media,

Arif Elahi, Chairman PNSC, said that the main purpose of the briefing was to understand the matters related to US visa and give the Pakistani shipping companies proper orientation so that their cadets or deck cadets may face no undue difficulty at US ports.

“The cadets passing out from Pakistan Marine Academy do not get jobs because of not having the US visas. The US visa gives them an additional international advantage as they can enter ports in many countries without any hindrances. This increases their chances of getting lucrative jobs,” he added.

The PNSC Chairman also said that in order to obtain visa, one has to satisfy the visa officer with proper related documents. He related suggestions to make the visa process easy and curtail the difficulties of seamen with reference to documents.
Posted by Chief Editor at 4:03 PM Links to this post

By Abdul Qadir Qureshi
(Pakistan News & Features Services)
The Pakistan National Shipping Corporation (PNSC) has successfully swapped its loan of Rs 3.3 billion with another loan on soft terms with a repayment period of four years on low mark-up. As a consequence, the PNSC has saved tens of millions of Rupees.

In this respect, a signing ceremony was held in the PNSC Building on November 18 which was attended by Senator  Kamran Michael,  Federal Minister Ports and Shipping, Arif Elahi, Chairman, PNSC, Tayyaba Rasheed, Head of Investment Banking Faysal Bank, Jarrar Haider Kazmi, General Manager Finance,  PNSC, and other officials of the two organizations.
The agreement was signed by Bilal Asghar, Head of Corporate Investment Banking on behalf of Faysal Bank and Imtiaz C Agboatwala Executive Director, Finance, signed on behalf of the PNSC.
On this occasion Arif Elahi, Cjairman, PNSC, informed that the agreement has enabled the corporation to repay the outstanding loan and replace with a loan on softer terms, saving substantial financial cost.
Posted by Chief Editor at 3:52 PM Links to this post