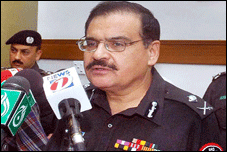 Police, in a pre-Muharram operation, have arrested a group of 5 terrorists who were planning to carry out terror activities during Muharram-ul-Haram.

He informed that suicide jackets have also been recovered from the arrested terrorists.

He said that as a result of measures taken by the police, the crime graph has dropped considerably. The IGP gave journalists comparative figures of crimes of the last six months.

He said that foolproof security arrangements have been made during Muharram-ul-Haram.
Posted by Chief Editor at 3:26 PM No comments: