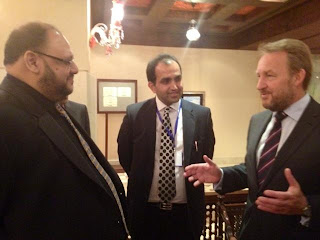 During exchange of views, the Bosnian President invited Arif Bukhari, to bring YPO delegation to Bosnia in order to explore business opportunities over there.

They also discussed other matters of mutual interests and Arif Bukhari, founder of YPO capital, expressed his gratitude and informed the President of his best feelings for Bosnia and his plans to arrange meaningful dialogues between the top businessmen of both countries.

Arif Bukhari, a Member Board of YPO MENA (Middle East & North African Region), is currently the Chapter Chair of Pakistan. He is also the Founder of YPO Indus chapter and Mentor of WPO Pakistan Chapter.