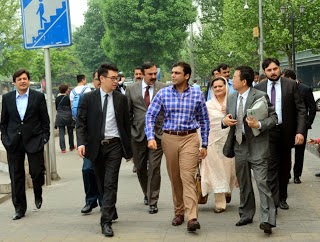 Welcoming the delegation at the CPC headquarters, Chen Fengxiang stressed the need for long-term regular and institutionalized party relations between the two countries. Both sides agreed to further strengthen and deepen party to party relations and exchanges at the party level. It was also discussed how both parties can benefit from each other’s experiences for improving the capacity of political parties.

The visit is a consequence of the MoU signed between the two countries during Prime Minister Nawaz Sharif’s official visit to in July last year. The Pakistan Muslim League (N) delegation is being led by Party Secretary General, Zafar Iqbal Jhagra also visited China in September last year. The CPC delegation also carried out reciprocal visit to in Febraury this year.

Hamza Shahbaz Sharif, at a luncheon hosted by Ambassador Masood Khalid at the Pakistan House in , said that the visit provided an opportunity to both sides to discuss further strengthening of party relations between the two countries and share experience about the formation and structure of political parties in the two countries.

Highlighting the time tested, all weather friendship he said that this was a very special trip to a with which we have cooperation and convergence in all areas. He also visited the metro orange line in to experience and observe the transportation system.

’s parliamentarian delegation of ruling political party, the PML arrived in on April 21 and will depart on April 29.

The delegation activities started from , the capital city of province where the delegation visited the grass roots organization of CPC ‘CPC Primary Unit.’ They also visited the study center at the and held in depth discussion on formation, structure and capacity building of political parties in each other’s countries.