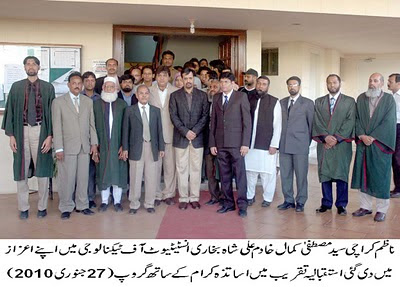 City Nazim Syed Mustafa Kamal has said that the youth of Pakistan are talented and intelligent but the educated and talented youth from middle class were not given the opportunity to serve the nation in the present political system. The future of Pakistan is associated with educated youth. Providing opportunity to middle class youth representing 98 percent of our population to serve their area or city can lead to progress similar to Karachi in whole Pakistan in just four years.

He expressed these views while addressing the reception given in his honor by Khadim Ali Shah Bukhari Institute of Technology (KASBIT) on Wednesday.

City Nazim said that the country has been governed by 38 families since 60 years who made MPAs and MNAs but they did not even establish a primary school in their jurisdiction while they sent their wards to foreign countries for education. “How can the country make progress in such conditions” adding that only those who have suffered with the problems can understand the real problems of our society. The middle class youth who represents 98 percent of our population can solve the problems of common men because only he could be made answerable to his people.

City Nazim said that Quaid-e-Tehreek Mr. Altaf Hussain is the only leader of the country who has given the opportunity to youth to represent the people. Karachi has set up a new example of serving the people and solution of basic problems in just four years. The middle class youth has given a new model of progress that could be implemented in whole country for rapid development.
He said that development is an ongoing process and it must continue as any temporary halt in the journey of development can put adverse affect on the society.

On this occasion a documentary depicting the development in Karachi during last four years was also screened while the Faculty members Israr Khan and Dr. Muhammad Mehmood appreciated the works of City Nazim Syed Mustafa Kamal and called him a national hero.
Posted by Chief Editor at 11:41 PM No comments: Links to this post