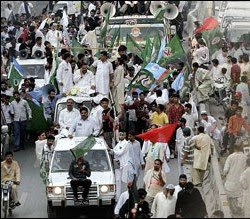 KARACHI: Police have started detaining the participants of Long March at Toll Plaza, Super Highway Karachi, reported A Pakistan News here Thursday.
Heavy contingent of police, ranger and other law enforcement agencies is present at the Toll plaza that has been sealed off for vehicles to prevent lawyers’ long march from continuing its journey towards Hyderabad, the first stop of the rally destined at Islamabad.
Police started detaining lawyers and political activists, belong to Jamaat-i-Islami, Tehreek-i-Insaf, Pakistan Muslim League-Nawaz and other nationalist parties, attending the march when they arrived at Karachi Toll Plaza at Super Highway.
Lawyers and political workers also scuffled with the law enforcers who brutally tortured the detainees. Police also baton charged the participants of long march at some points, says the channel.
Former Amir JI Karachi Mairajul Huda Siddiqui, President Sindh High Court Bar Association Rashid A Rizvi and Ex-President Supreme Court Bar Association Munir A Malik are also among the detainees arrested from the Toll Plaza.
SP Gaddap Town informed A Pakistan News that the participants of Long March will not be allowed to cross Toll Plaza. Police have also said to be possessed warrants of 11 top lawyers present in the march.
Police personnel snatched the keys of the vehicles present in the Long March
Posted by Chief Editor at 5:06 PM No comments: Links to this post