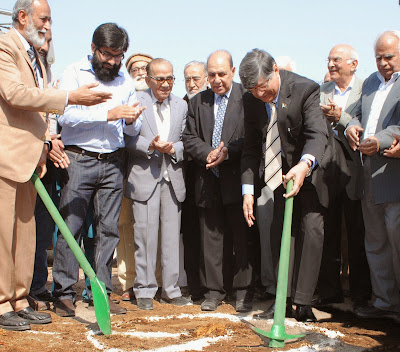 The work on the multi-million Sir Syed Tower, a project of the Aligarh Muslim University Old Boys Association (AMUOBA) has started following the ground breaking ceremony at the project site.

Engr Mohammad Adil Usman, President, AMUOBA, and Chancellor, Sir Syed University of Engineering & Technology (SSUET), performed the ground breaking ceremony which was attended, among others, by members of the Association and its Executive Committee besides guests from different walks of life.

The Sir Syed Tower, upon completion, will serve as academic and corporate hub to promote AMUOBA’s intellectual, cultural and academic activities.

Addressing the ceremony, Engr Adil Usman observed that the Tower, a project to be of historical value, was being planned since long but the work could not take off earlier for some reason or the other.

“The construction work has commenced today which is the happiest and unforgettable moment for the Aligarhians who have always cherished to follow the mission of our great reformer and educationist Sir Syed Ahmed Khan. 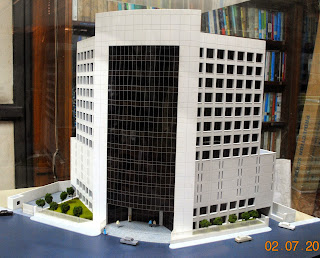 “We have successfully achieved our target with our sincere efforts and dedication and it will prove to be a dream coming true project,” Chancellor Adil Usman remarked.

He informed that the Tower construction is being financed with own resources. But due to the financial constraints, only basement, ground and first floor would be constructed in the first phase.

He hoped that the philanthropists will come forward and donate towards this noble project. He appealed to the Aligarhians to mobilize their personal contacts and influence to obtain funds for the project.

The AMUOBA President said that the Sir Syed Tower is not being raised to get monetary or commercial benefits but the revenues to be generated will be utilized for promotion of academic activities and establishment of educational institutions by the Association.
Posted by Chief Editor at 11:39 AM