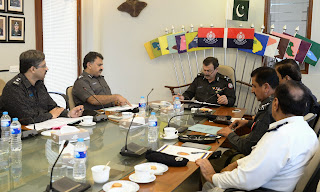 The meeting, held at the Central Police Office (CPO) in Karachi, also reviewed the performance of investigation cell.

According to a press release issued by the department, the meeting was attended by district SSPs of Karachi and other senior police officers.

He ordered to take initiatives to provide modern investigation kits with mobiles so that the evidences from the crime spot could be saved and make investigation more effective.

He ordered to depute officers of Inspector ranks only as SIOs and to ensure training of investigation staff. He also directed to improve coordination with Forensic division Sindh.
Posted by Chief Editor at 9:52 PM