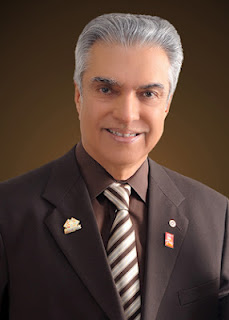 Aziz Memon, Chairman of Rotary International’s PolioPlus Committee, has expressed the eagerness to learn from India’s success in eradicating polio from Pakistan, one of three nations still registering indigenous transmission of wild poliovirus.

“India have not recorded a single case of polio since January 13, 2011, a fact acknowledged by the World Health Organization (WHO). Their success in the eradication of polio, serves as a beacon of hope for the nations like Pakistan, Afghanistan and Nigeria who are still struggling to control polio,” Aziz Memon, having served as the Governor of Rotary International’s District 3270 covering Afghanistan and Pakistan, remarked in an interview with the PNFS in Karachi on September 25.

“Pakistan could imbibe invaluable lessons from its neighbour about eradicating polio. This is vitally important because Pakistan had experienced the world’s largest nationwide outbreak of polio in 2011 with 198 reported cases,” he added.

“As of June 8, 2012, Pakistan had reported 21 cases of wild poliovirus, compared to 52 cases during the same period in 2011. Insurgency and security-related dangers don’t allow our national polio programme to consistently reach children in certain areas of FATA. Also the sub-optimal management of the programme at the sub-district level in Khyber Pakhtunkhwa, Sindh and Balochistan has seen inconsistent polio campaigns, with many children being missed during immunisation drives,” the Rotary official regretted.

‘In order to overcome the challenges, Rotary International has undertaken vigorous efforts in promoting the Polio Eradication Campaign in Pakistan, just as it did in India. Along with its partners, UNICEF and WHO, Rotary’s PolioPlus Committee in Pakistan has been overseeing eradication efforts. Pakistan has emulated India by roping in celebrity ambassadors to advance the cause of polio eradication and the most popular cricketer of the country, Shahid Afridi, is a part of the Polio Eradication Campaign,” Aziz Memon noted.

“The Rotary Clubs in Pakistan have been more proactive and persist with polio camps, walks and workshops that drive awareness and eradication efforts. Pakistan PolioPlus Committee has installed billboards in high-risk districts for national campaigns, with some billboards being permanent. As per the government’s request, an additional 45,000 vaccine carriers have been made to ensure quality of activities don’t suffer,” he disclosed.

“The Pakistani authorities are firmly committed to implementing eradication efforts to ensure polio spikes within its borders are curbed. To facilitate the success of its anti-polio initiatives, we sought India’s support in this drive. Apart from the exchange of delegations between the two nations, Pakistan’s serious intent is also evident from the fact that Pakistan President Asif Ali Zardari is personally involved in the campaign against polio,” Aziz Memon explained.

“Concerted and sustained efforts on the part of all stakeholders, public and private entities, partnerships and the public, for polio to be finally eradicated from Pakistan are essential because a failure to do so will leave open the perennial threat of wild poliovirus making a surreptitious comeback in other geographies too; that is something Pakistan, and the world, can ill afford at this crucial juncture,” he warned.
Posted by Chief Editor at 11:27 PM