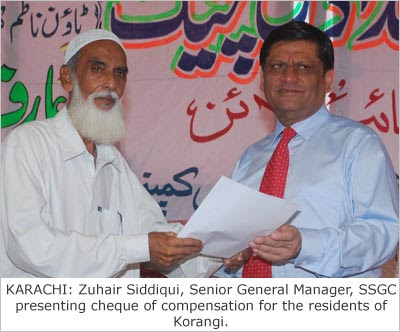 KARACHI: SSGC as a good corporate citizen responded to it social responsibilities when the utility distributed Rs. 1.25 million amongst 125 families who got affected on December 17, 2008 after a PARCO’s pipeline was inadvertently damaged during the routine operational work carried out by the company’s crew. Zuhair Siddiqui, Senior General Manager, Management Services, SSGC, Amir Mumtaz Khan, A. General Manager (Admin) and Hafiz Azeem Chief Manager (Admin) distributed the cheques in a simple yet impressive ceremony hosted by Mohammad Arif Khan Advocate, Town Nazim, Korangi in the town office. The Town Nazim lauded SSGC for rising to the occasion and facilitating the families whose house were badly affected from the massive oil spill.
Posted by Chief Editor at 1:38 PM No comments: Links to this post 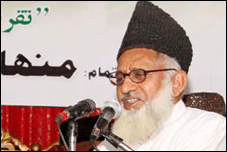 KARACHI: Panic gripped different parts of the city as unknown miscreants started aerial firing and pelted stones to passing vehicles when news spread about the killing of renowned religious scholar Mufti Sarfarz Naeemi yesterday in Lahore. City`s different parts including Lea Market, M.A Jinnah road, Burns road, Nishtar road, areas of the lyari, some part of Brigade police station limits, Hassan Square, Tariq road, Mehmoodabad and some parts of New Karachi, Landhi, Malir Korangi, SITE area Banars and Orangi town and others were closed as unknown miscreants started aerial firings in these areas.
Although the commercial and pubic life was not suspended but some area shopkeepers were forced to closed their shops while commuters, pedestrians and employees were trying to reach home as soon as possible due to uncertain situation. Meanwhile, there was severe traffic jam in downtown areas of the city, as hundreds of vehicles were trapped as people tried to reach home immediately.
Posted by Chief Editor at 1:13 PM No comments: Links to this post