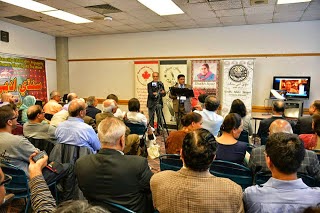 Shaikh Ayaz, a revolutionary and legendary poet was commended and highlighted at a literary gathering jointly organized by the Sindhi Adabi Sangat Canada and the Writers Forum.

Intellectuals and writers of Sindhi, Urdu, Punjabi and Baluchi languages came together to share and discuss the works of South Asia’s intellectual giant Shaikh Ayaz who contributed his works in Sindhi, Urdu, English and other languages, and is considered an icon of Sindhi literature after Shah Abdul Latif Bhittai, whose poetry and message of resistance against tyranny and dictatorships continues to resonate around the world.

Yousuf Shaheen, a legendary Sindhi intellectual, poet, writer and journalist in his address on the occasion from Pakistan through skype recited Shaikh Ayaz’s poetry.

He said that Shaikh Ayaz was a brave poet and writer who not only boosted the morale of progressive political struggles but also inspired other writers and intellectuals to become part of these movements meant for country’s true independence from tyranny.
Moonis Ayaz Shaikh, a respected Pakistani intellectual and son of Shaikh Ayaz also participated in the event through Skype along with his wife Sheeba Tabassum and shared the principles of Shaikh Ayaz’s philosophy. He congratulated the organizers for carrying the flag of Shaikh Ayaz’s message beyond the seven seas.

Moonis said that Shaikh Ayaz was a true son of soil who loved his nation and his land and also dreamt for the freedom and bright future of poor peasants and labourers and his struggle will continue until the tyranny and persecution is abolished.

Nuzhat Siddiqui, a Director and former President of the Writers Forum, opened the program and presented a detailed introduction and commentary on Shaikh Ayaz and his struggle in a thoughtful way which was lauded by all.

She said that though Shaikh Ayaz is no more with us physically but his presence is felt whenever a dictator comes up to deprive us from our rights. “We are fortunate to learn form a great poet and great revolutionary whose message of peace continues to win the hearts” she added.

Participating from Canada, Sindhi Adabi Sangat Canada’s Secretary Zulfiqar Shaikh came up with an audio visual presentation and commented on major themes of Shaikh Ayaz under the topic ‘Shaikh Ayaz, a legend, a revolutionary Poet.’

The presentation also included the heart rendering narration of poetry in Shaikh Ayaz’s own voice as well as sung by renowned artists Jiji Zarina Baloch, Shafi Faqeer and others.

Zulfiqar said that the soil of Sindh is not only fertile and rich with hidden resources but also rich with the characters like Shaikh Ayaz, Shah Latif, Sachal Sarmast, Ustad Bokhari and many more who set examples of resistance and selflessness.

He said that when Shaikh Ayaz was alive, some people considered his presences as second birth of Shah Abdul Latif Bhitai and many deemed him even greater than Bhittai, though some people also opposed him. 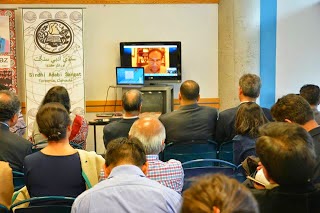 Zulfiqar offered his sincere thanks to the Writers Forum and especially to Abid Jaffery and Munir Pervaiz who invited them to celebrate the day of a world legend belonging to Sindh, Pakistan.

Representing the Canadian youth, Yasser Pervaiz commented that Shaikh Ayaz’s message is not limited to Sindhi, Urdu, or other languages of South Asia, but carries a universal resonance that moves all to work against tyranny and repression. He also shared English translations of three of Shaikh Ayaz’s major poems in a very passionate way.

Preetam Luhano who is a poet and also the joint secretary of Sindhi Adabi Sangat presented his article titled, “Shaikh Ayaz a continuity of Sindhi Literature” and presented several important examples from Shaikh Ayaz poetry.

Writer, Columnist and Editor of Ameeq magazine, Khair Mohammed Kolachi , brought the samples of Shaikh Ayaz’s prose to the attention of the audience, and advised that Shaikh Ayaz has the same command of the word, punch, and force in his prose that is the spirit of his poetry.

He said that Shaikh Ayaz sahib though was a Sindhi by birth but always fought beyond the differences of religion and languages, and became the voice of oppressed people of subcontinent.

Munir Pervaiz Saami, the Secretary of the Writers Forum moderated the program by reciting representative poems of Shaikh Ayaz.

An exhibition of Shaikh Ayaz’s books was also arranged at the event. Many observers commented that this was among the finest literary events in Canada’s South Asian diaspora.

On this occasion 21 copies from Shaikh Ayaz’s Books “Sahiwal Jail ji Diary”, and collection of article published on Shaikh Ayaz in Books under the titles, “Fikr e Ayaz”, and “Zikr e Ayaz” were presented to the guests as a gift from the Writers Forum. These books have been edited by Asif Farrukhi and Shah Muhammad Pirzada, and published by Maktab e Daniyal.