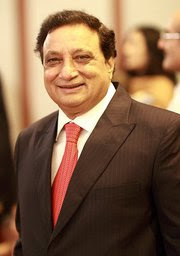 Khawaja Naveed Ahmed, the defence counsel for accused in the 530 acres of land illegal allotment case, has clarified a news item appearing in a section of the press and electronic media alleging that he helped two accused in the case to abscond from the court after their interim pre-arrest bail order was recalled by a Division Bench of the Supreme Court.

Khawaja Naveed, one of the most respected lawyers of the country, has clarified that the accused were on an interim pre-arrest bail for the last about two years and had attended Supreme Court as well as trial court at every hearing.

According to him five witnesses in this case had been examined and the two accused had never missed any date of hearing.

He stated that after recall of their interim pre-arrest bail, they were going to trial court to surrender themselves where the case was proceeding.

He further stated that there was no point of their absconding because they had submitted cash security of Rupee five lac each which is still lying with the court. They could not imagine to abscond as their security was already with the court.

Khawaja Naveed described the news as misleading and said the fact has been twisted to make it sensational. He said it’s a normal practice and we surrender the accused after their pre-arrest bail order is recalled or may be rejected.
Posted by Chief Editor at 10:28 PM Links to this post 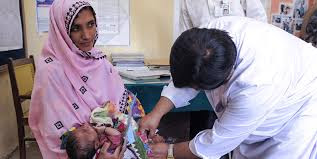 The children in the Lyari neighbourhood of Karachi, one of the areas worst-hit by the typhoid outbreak in Sindh, are receiving their first dose of the typhoid conjugate vaccine (TCV), the latest vaccine to be included in Pakistan’s routine immunization programme.

The staff from Aga Khan University (AKU), working in partnership with the Sindh government, will inoculate over 100,000 infants and children between the ages of six months and 15 years by administering the vaccine at public and private sector schools and hospitals based in one of the city’s most densely populated towns.

“This is the first step in a mass immunization campaign for Sindh. The vaccine is the most effective way to curb new cases and to protect children from a disease which is becoming increasingly expensive and difficult to treat,” Dr Azra Fazal Pechuho, Sindh Health minister, remarked.

Pakistan is the first country among low-income nations eligible for funding from GAVI, a global, public-private partnership committed to increasing access to immunization to include TCV in its nationwide schedule of vaccines against 11 preventable diseases. 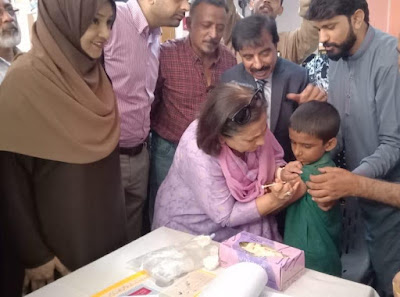 The decision is in line with the country’s commitment to end outbreaks of water-borne and communicable diseases in its efforts to meet goal 3 of the Sustainable Development Goals.

“Deaths and complications from typhoid were rare over the past 15 years but the ongoing outbreak has put an unprecedented number of children at risk,” Farah Qamar, an associate professor in paediatrics and child health at AKU, stated.

“Efforts are underway to address the root cause of the outbreak failings in our water and sanitation system but in the meantime this vaccine represents the best way to save lives,” she added. 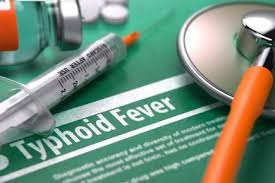 Researchers from the AKU will analyze the data from the Lyari drive to understand factors determining the acceptability and efficacy of the vaccine which, in turn, will enable its successful rollout across the country from October 2019.

The World Health Organization (WHO) has disclosed that over 5,000 cases of XDR typhoid have been reported in the province to date.

The scale of the outbreak led the Sindh government and private sector partners, such as the AKU and the Bill and Melinda Gates Foundation, collaborating to launch an emergency vaccination drive in Hyderabad in January 2018. 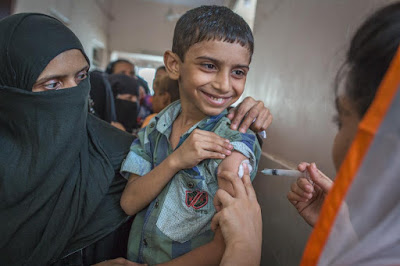 The faculty and staff at the AKU microbiology laboratory first detected the typhoid outbreak in blood culture tests from Hyderabad in October 2016. They collaborated with epidemiologists and infectious disease specialists from the University’s department of paediatrics to bring the matter to the attention of local government, the WHO, the US National Institutes of Health, the Sabin Vaccine Institute and the UK-based Wellcome Sanger Institute.

Since then, the university’s researchers and its partners have collaborated on a number of studies to understand the genetic make-up of the typhoid strain, to ascertain risk factors for its geographic spread and to assess the safety and efficacy of TCV in an emergency outbreak situation.

Data and policy implications stemming from these studies were shared with the Drug Regulatory Authority of Pakistan and the federal government’s National Technical Advisory Group.

This led to a successful application for funding from GAVI and the Bill and Melinda Gates Foundation resulting in the permanent inclusion of TCV in the country’s nationwide immunization programme, a win-win situation for stopping the spread of a preventable disease.
Posted by Chief Editor at 10:26 PM Links to this post 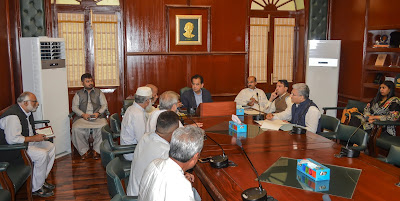 Commissioner Karachi, Iftikhar Shalwani, has advised the Karachi Metropolitan Corporation (KMC) to finalize the issue of 403 shopkeepers of Zoological Garden Market displaced during anti-encroachment drive launched on the orders of the Supreme Court.

The delegation apprised the Commissioner about their grievances and informed that they were displaced from their businesses on January 5 with a promise that they will be provided alternate place for their business.

However, despite the lapse of six months, they have not been compensated as yet nor accommodated at any other place.

Commissioner Karachi, Iftikhar Shalwani, gave them patient hearing and assured that their problems would be solved on priority basis.

He told them to remain open minded to accept the substitute place as per policy and record which will be given to them after due verification.

He directed Assistant Commissioner (Revenue) to check the available record and submit report in this regard.

He also directed DC South to identify the alternate place for placement of affected shopkeepers.

The Commissioner directed KMC to hold a meeting of affected shopkeepers with the Mayor and Municipal Commissioner to sort out their issues and to conduct a proper survey for alternative places.

The DC South was told to keep vigil against illegal encroachments and check fruit carts near parking plaza, which might turn a permanent market and create problems in future.
Posted by Chief Editor at 10:22 PM Links to this post 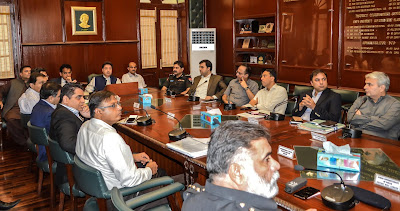 The Federal Secretary, Ministry of Railways, and Chairman, Pakistan Railway Board, Sikandar Sultan Jalal visited Karachi and held a meeting reviewing the ten-day ongoing anti-encroachment drive for revival of the Karachi Circular Railway KCR) under the directives of Supreme Court.

The Secretary Railways, in his remarks, stated that he’s regularly receiving progress reports with regard to ongoing ant-encroachment campaign to clear tracks for the KCR.

He regarded the progress being satisfactory and appreciated the efforts of the teams undertaking the task.

"Now we are able to submit a positive and implementable report to the SC."' he said and described as commendable the efforts being made and steps taken by Commissioner Karachi, Divisional Superintendent Railways and all team members.

He pointed out that the KCR was most imperative for the people of this ever sprawling city and everyone involved is making efforts to pave the way for revival of the KCR within the stipulated time frame. 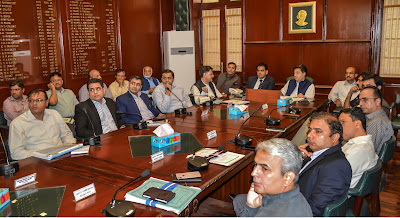 He pointed out that all leases issued by Pakistan Railways would be examined by DS Railway Karachi Division and legal action taken accordingly.

The leases issued by the likes of Board of Revenue and Katchi Abadis department of the Karachi Metropolitan Corporation (KMC) would also be examined by respective agencies as per law and policy as per SC directives.

Meanwhile, a 7 Members committee is being constituted with all stakeholder, departments and concerned to carry out basic homework and legal formalities for revive the KCR and to work out a most modern urban transport system on priority basis to meet the commuting needs of the people of this metropolis. 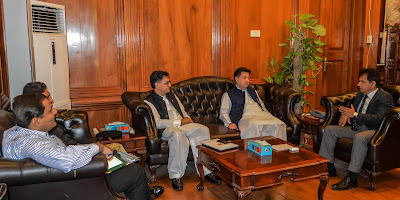 Federal Secretary Railways Sikandar Sultan Jalal lauded the efforts of Sindh government in the entire scenario and the steps taken by the Commissioner Karachi and said the Railways will extend its all cooperation to them to start the KCR project in time.

The Commissioner Karachi, Iftikhar Shallwani, while welcoming the Federal Secretary Railway briefed him about on-going operation and said everyone involved was working for the accomplishment of this most important task.

He assured that a positive and comprehensive report will be submitted to SC and measures taken accordingly for revival of KCR by Sindh Government for the people of Karachi.

The meeting was briefed by respective Deputy Commissioners about their progress of operation at their individual levels.

They drew attention towards many important aspects to operation and revival of KCR.

They reaffirmed of their determination for attainment of result oriented targets.

The DS Railways, Syed Mazhar Ali Shah, and DIG Operation PR, Azhar Rasheed Khan, also briefed the visiting Secretary about steps taken and progress achieved so far during the operation. They hoped that the encroachments removed would not be allowed to resurface.

Earlier Commissioner Karachi Iftikhar Shallwani met the Federal Secretary and discussed important KCR related issues and its revival under SC directives. He reiterated his proposal for a trial run of a train on KCR route.
Posted by Chief Editor at 10:20 PM Links to this post