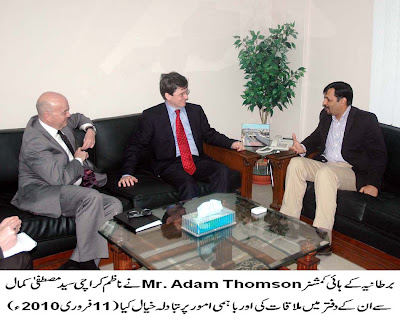 British High Commissioner Adam Thomson called on City Nazim Syed Mustafa Kamal at his office on Thursday. During the meeting it was agreed that Karachi is not only the biggest city and economic hub of Pakistan but an important city of the region. Business and trade activities in this city should increase further which would be beneficial for Pakistan as well as the whole region. Karachi offers lucrative investment opportunities to business community worldwide where they can earn maximum profits on their investments.

The British High Commissioner on this occasion appreciated recent infrastructure uplift and development projects in Karachi and called it a good omen. It was agreed that the current development process should be carried on as any halt in this process would raise the problems for citizens.

He said that City Government Karachi has also taken great measures to control environmental pollution. The Green Karachi Campaign has been appreciated all over the world.

City Nazim Syed Mustafa Kamal apprised the high commissioner about the development process that has been carried out in Karachi. He also informed him about the provision of basic facilities to citizens including water and sewerage system and road infrastructure development. He said that city government has constructed many signal free corridors in Karachi to overcome traffic problems while lot of projects in health and education sector were also been completed during last four years.
Posted by Chief Editor at 11:13 PM No comments: Links to this post