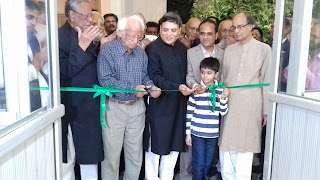 The newly constructed 10-storeyed academic Block “E” at the Sr Syed University of Engineering and Technology (SSUET), Karachi, was inaugurated on the occasion of Nizami Day observed on April 9.

The block has been named in memory of the university’s Founder Chancellor Engr Z.A. Nizami, who passed away three years ago.

The block was inaugurated with the cutting of ribbon jointly by senior Aligarian, Mazhar Aslam Zuberi, 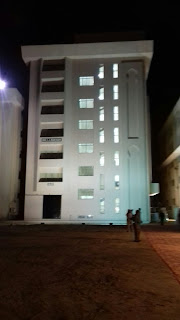 The SSUET Chancellor Jawaid Anwar said that eight floors of the block will be used for academic purposes and faculty offices while upper two floors will have a modern auditorium.

He pointed out that the foundation stone of the new Block E was laid by former Chancellor Adil Usman in November 2013.

The Chancellor said that various steps have been taken and more were underway for the development and up gradation of the university to earn it a highest place in the HEC’s ranking.
Posted by Chief Editor at 4:07 PM 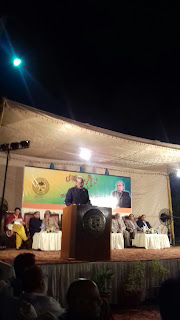 The man who developed Karachi to its present day level, worked for promotion of scientific education, carried forward the mission of great educationist and reformer Sir Syed Ahmed Khan and above all a great human being was remembered at a ‘Nizami Day’ function held under the auspices of the Aligarh Muslim University Old Boys Association (AMUOBA) at the campus of Sir Syed University of Engineering and Technology on April 9.

Engr Z A Nizami, who remained the Chancellor of Sir Syed University of Engineering and Technology (SSUET) for over 18 years after its establishment, had passed away three years ago, on April 7, 2013.

Presided over by the SSUET Chancellor and the AMUOBA President, Jawaid Anwar, the speakers on the occasion included noted scholar Prof Dr Waqar Ahmed Rizvi, Farrukh Nizami, former Chairman BISE Prof Anwar Ahmed Zai and former Director Public Relations KDA Rizwan Siddiqi who in their speeches recalled the services of late Z.A. Nizami as an Administrator, an engineer, an educationist and above all a true flag bearer of the mission of Sir Syed Ahmed Khan.

In his presidential address, Chancellor Jawaid Anwar vowed to take SSUET from its present 20th position, as ranked by Higher Education Commission, to the level of a world class institution. 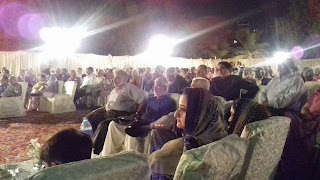 He said that those nations don’t survive if they forget their benefactors and so is Mr Nizami who will always be remembered for his outstanding works and services, especially for the cause of education, particularly in the field of science and technology.

He recalled his long association with Mr Nizami and said he had an outstanding power of decision making. Once he would take a decision it was bound to be executed and this was reflective from his 45 development schemes he launched during his eight-year tenure as DG KDA.

He said this university came into being as a result of hard struggle by Mr Nizami, late Zakir Ali Khan, late Brig Qamarussalam and the cooperation of AMUOBA who founded Aligarh Institute of Technology (AIT) and it had the distinction of being the first engineering university in the private sector. 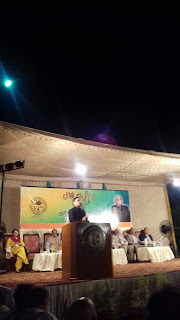 Chancellor Jawaid Anwar recounted the measures which have been taken so far and are being taken for continuous up gradation of SSUET as a part of the AMUOBA’s resolve to carry forward the mission of Sir Syed Ahmed Khan.

He said its positive effects have started surfacing. He said the best step to pay tributes to Mr Nizami and his compatriot Zakir Ali Khan is to carry SSUET to the highest position.

In his speech, Prof Dr Waqar Ahmed Rizvi described Mr Nizami an outstanding Administrator who had the ability and capacity to administer the institutions and this can be judged from the 45 development schemes he launched as DG KDA and not a single one planned after he retired.

He said his life was a continuous struggle and his aim was to make Karachi an ideal society with Civic Center being an icon of his focus and later SSUET being the hallmark of his mission.. He was a kind person and hundreds of poor families today are surviving because of his God-gifted kindness. 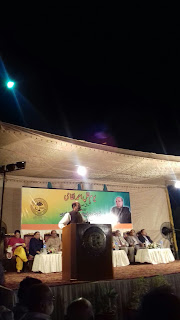 Farrukh Nizami recalled his memories about his great father and said that there would be only few people who may be having score of buildings, institutions, roads and structures named after them. He said a book on the life and achievements of his father is ready and will be launched soon. Besides, a postal stamp is also being issued in his memory.

He said his father was a true reflection of ‘Aligarh Spirit’ which was fully infused in his soul. This Aligarh spirit can be defined in three words “unity, equality and character building” and this was religiously followed by him in throughout his life.

Rizwan Siddiqi, who remained Director Public Relations KDA, during the DG ship of Mr Nizami, said that Mr Nizami performed the feats in Karachi like that of Sir Syed Ahmed Khan. What he gained in Aligarh University, he distributed it here. 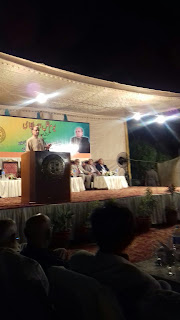 He said Mr Nizami was one of those personalities who never retire and keep performing feats for the welfare of people and SSUET is one such example from where thousands of students graduated and today bringing shine and fame for their homeland.

On the occasion a beautiful documentary on the life, achievements and an interview of Engr Z A Nizami was also screened and applauded by the audience.

The Inspector General of Police (IGP), Sindh. A. D. Khowaja presided over a high level meeting regarding revamping of Karachi police and to raise the standards of policing according to the police rules. He also reviewed in details the police measures being adopted for the security of the citizens.

During the meeting, the IGP remarked that extraordinary measures must be ensured to improve law and order situation by even utilization of available resources and manpower.

"Police should fulfill their responsibilities while ensuring team work and take action against criminals/terrorists without any discrimination,” he stressed.

He directed that steps should also be ensured to eliminate possible terrorist activities and organized crimes by way of strengthening the Advance Intelligence Collection System.

"Any information with regard to terrorist activity should be followed without any delay ensuring all necessary security arrangements,” he emphasized.

The IGP said that extraordinary security should be ensured to protect life and property of citizens, while effective security steps must be adopted at Masajids, Imambargahs, non-Muslims’ worship places, vital installations, important government/semi government offices/buildings and all other public places.

The IGP also sought a comprehensive proposal/recommendation for practically effective restructuring of Karachi police removing the bottleneck in operations and Investigations policing.
Posted by Chief Editor at 4:02 PM