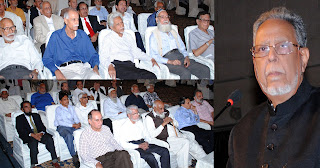 The Chancellor of the Sir Syed University of Engineering & Technology (SSUET), Karachi, Jawaid Anwar has announced medical insurance and revised pay scale besides other facilities for the university’s employees.

He made the announcement amidst applause while addressing the Aligarhians at a reception held at the university campus to celebrate the victory of the Zakir Ali Khan Panel in the recently held elections of the Aligarh Muslim University Old Boys Association (AMUOBA).

"I have always believed in governing with respect and look forward to work together to meet the challenges ahead with no political conflict,” the AMUOBA President stated

He congratulated his team on a hard-fought campaign adding that the Zakir Ali Khan Panel has been provided a golden opportunity to bring about changes for a constructive growth and betterment at the campus.

He declared that AMUOBA will provide a favorable environment for everyone to pursue the cherished objectives. Chancellor Jawaid Anwar said he will not be carrying anyone to a blind optimism or to wishful idealism.

“In keeping our promise we have immediately started to deliver and as a first move the hockey ground opposite the campus has been reopened for parking of vehicles of SSUET employees and students after so many years," he remarked adding that the place will also be provided with facilities for sports activities.

He announced that employee’s pay scales will be revised in coming months while tenders have been invited for introducing their medical insurance in a transparent manner.

The Chancellor informed that instructions have been issued for preparing a performance-based audit report of each department on the basis of which promotions and facilities will be announced on merit.
Appreciating the role of teachers in the society he pointed out that faculty is the backbone of the university and they must be provided with better facilities. He asked them to strive to improve the SSUET’s image.

He advised the Vice Chancellor and faculty members to join hands with him to bring a constructive change in the university in pursuing the vision of great educationist and reformer Sir Syed Ahmed Khan who awakened the Muslims from slumber and ignorance and opened up venues for modern learning.

On the occasion, in recognition of 50 years of valuable service of ideal Aligarian Late Muhammad Zakir Ali Khan, shields were presented to his sons Muhammad Nadir Ali Khan and Muhammad Akbar Ali Khan.

The guests gave a standing ovation to Mazhar Aslam Zuberi who had Rs 5.1 million, a big chunk of his retirement dues, as donation to the Association and recently gave Rs 1 lakh for the construction of Sir Syed Tower, while he himself is living in an ordinary apartment.

Earlier, in his speech, Vice President AMUOBA, Tariq Sabzwari, said: “We follow the mission of the great visionary Sir Syed Ahmed Khan and victory of Zakir Ali Khan panel is a pleasant change.

The event was conducted elegantly by Noshaba Siddiqui, a member of AMUOBA’s Executive Committee, and concluded with the National Anthem and the Tarana e Aligarh.

The DIG South, Dr Jamil Ahmed, has recognized that the construction industry provides job opportunities on a very large scale and, therefore, its problems relating to law and order would be tackled on preferential basis.

He was speaking at a function organized by the Association of Builders and Developers (ABAD) at the ABAD House in Karachi Those present on the occasion included Chairman ABAD, Mohammed Hanif Gohar, Vice-Chairman Mohammed Ramzan Adhia, Regional Chairman Asif Sumsum and others.

The DIG reckoned that the law and order situation in Karachi has improved by 80 percent while efforts are being made to curb other minor crimes as well.

He was appreciative of the ABAD's role towards promotion of national economy and stated that his doors were open for every ABAD member.

He said that the cooperation with ABAD will not be restricted to District South but the entire Karachi Police will extend its helping hand.

On the occasion he formed a mutual coordination committee to help immediate resolution of the problems being faced by the ABAD members. The committee will comprise SSP Investigation, Abid Hussain Qaimkhani, from the police side and Junaid Ashraf from ABAD.

He said that the confidence of builders has greatly been restored because of high performance of Police and Rangers and now they felt themselves more secured while carrying out their business activities.

The Chairman of ABAD’s Southern Region, Asif Sumsum, remarked that builder's 90 percent problems have been resolved mainly due to restoration of law and order for which he paid tributes to the police.
Posted by Chief Editor at 5:14 PM

Chinese get 650 acres of land in Gwadar 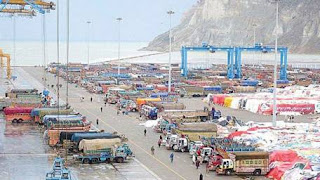 The Chinese have been handed over 650 acres of land in Gwadar in connection with the development of infrastructure facilities at Gwadar Port.

In this regard a MoU was signed between the Ministry of Ports and Shipping and visiting Chinese delegation headed by Wang Xiatao.

The Federal Minister for Ports and Shipping, Senator Kamran Michael, was also present on the occasion.

In his remarks on the occasion, Kamran Michael stated that Gwadar will become a smart port city in three years thus opening up more job opportunities for the people of Gwadar and reducing prevailing poverty from the area.

He described the MoU as the first step towards a new journey of Pakistan-China friendship and said it will benefit both the countries in future.
Posted by Chief Editor at 5:09 PM