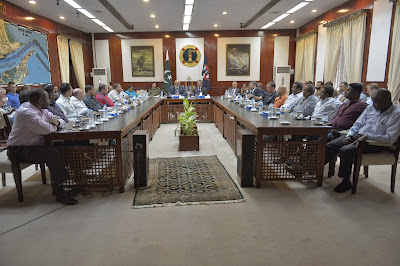 This was stated by the KPT Chairman, Vice Admiral Shafqat Jawed, while briefing a visiting high level delegation from National Defence University, participating in National Security and War Course 2014-15.

On the occasion various capital intensive port-related projects came under discussion and Chairman KPT briefed the delegation on the new deep water container port which is scheduled to become functional by the end of this year.

He informed that the new port will open new avenues for trade and commerce for Pakistan and pave way for the port to become transhipment hub of the region. He pointed out that the KPT has been playing a key role in the national trade and commerce. 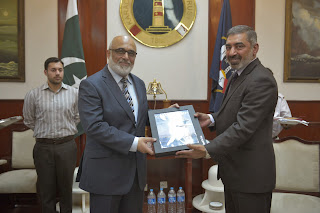 He reckoned that the development of the deep water container port was a timely decision for the Karachi Port is strategically located well set to cash on the change that has taken place due to shift of world economy towards Asia.

The inter-active session concluded with the exchange of crests between the KPT, Chairman, Vice Admiral Shafqat Jawed HI (M), and the leader of the delegation, Rear Admiral Moazzam Ilyas SI (M).

The delegation was given comprehensive briefing on management, administrative areas, functions and the ongoing projects of the KPT.
Posted by Chief Editor at 2:07 PM