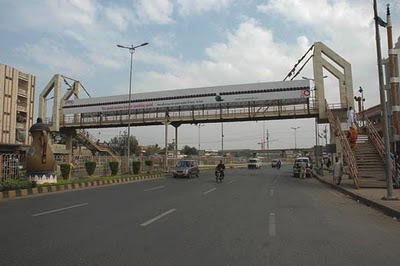 On the directive and policy of City Nazim Syed Mustafa Kamal City District Government Karachi has completed the construction of 52 overhead pedestrian bridges in the city with a cost of Rs.880million. These bridges have been constructed at different points on all three signal free corridors and other busy thoroughfares.

Citizens of Karachi have appreciated the construction of overhead pedestrian bridges on busy point in the city. They said that the bridges have provided convenience in crossing roads especially during rush hours while they also added to the beauty of newly constructed corridors in the city.
Posted by Chief Editor at 11:58 PM 1 comment: