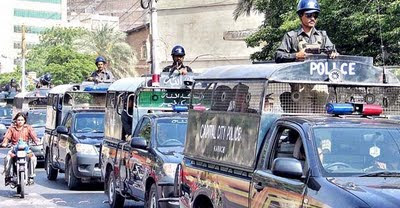 The security across Sindh especially Karachi has been put on "red-alert" following the terrorist attack on the General Headquarter Rawalpindi (GHQ), while the security agencies have been ordered to remain alert in order to avoid any untoward incident.
The police sources revealed here on Sunday, the law enforcing agencies have prepared the lists for the arrest of the activists of the banned organizations.
Sources said that these organizations include banned Sippah-e-Sahaba-e-Pakistan, Lashkar-e-Jhangvi, Sippah-e-Muhammad, Jash-e-Muhammad, Harak-ul-Jihad-e-Islami, Jindullah Group (Haji Mumtaz alias Hamza Group), Jandullah group (Amjid Farooqi Group), Harakat ul Mujahideen and several others banned organizations.
Sources added that the security agencies have been ordered for the search of the workers of the above mentioned banned organizations in Landhi, Malir, Korangi, Model Colony, Shah Faisal Colony, Sherpao Colony, Future Colony, Millat Colony, Mungho Pir areas of Karachi.
While on the other hand, the security has been put on red alert of all sensitive building and installations including Sindh Assembly, Sindh High Court including Red Zone, Corps Commander Office, Navel and Air Force Office, Sindh Home Department, Central Jail Police Office, Garden Headquarter and Police Training Centre.
Posted by Chief Editor at 12:04 AM No comments: Links to this post