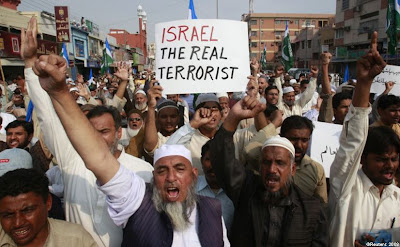 Separate protest demonstrations were held in the city on Sunday to condemn the Israeli military operation in Gaza Strip that killed around 271 Palestinians.

The protesters carried banners and placards inscribed with slogans against Israel, the US and India, and chanted slogans. JI Central Secretary General Syed Munawar Hussain, JI Karachi Amir Muhammad Hussain Mehnti, JI Karachi Secretary General Hafiz Naeemur Rehman and other JI office-bearers addressed the protesters. Addressing the participants of the protest demonstration, JI leader Munawar Hassan condemned the air strikes by the Israel and criticised Muslim rulers for not raising any strong voice against the killing of innocent Palestinians. He maintained that Palestine is surrounded by the Muslims states but despite this, Israel is committing its atrocities.

JI Karachi Amir Muhammad Hussain Mehnti lamented that Israel has besieged Gaza and halted water supply besides stopping medicines and other treatment facilities to the people while the UN is playing a role of silent spectator. He maintained that world community, which raised voice over the Mumbai attacks, should also raise its voice against the Israeli atrocities. Meanwhile, the Palestine Liberation Foundation Pakistan (PLF) staged a protest against Israeli aggression in front of the local press club. Hundreds of protesters chanted slogans and torched and flags. ppi/staff report
Posted by Chief Editor at 4:25 PM No comments:

Email ThisBlogThis!Share to TwitterShare to FacebookShare to Pinterest
Labels: News

Karachi is not prepared for calamities or war

At a time when Pakistan has reached the brink of war with India, both civilian and military-led municipal organisations are neither prepared to carry out rescue operations nor they have been put on any kind of alert by the authorities.

The first line of civil defence i.e. provincial Civil Defence Organization is lying functionless and ineffective for the past many decades owing to the negligence of authorities concerned. It is not performing peacetime activities either, such as training volunteers and creating awareness to cope with any natural or manmade disasters.

A visit to the provincial Civil Defence Organization’s headquarters in Saddar Town and interviews with its officials revealed that the organization is virtually dead now and could not even play a cosmetic role in case of air strikes or natural disasters such as earthquakes or tsunamis.

During the interviews with civil defence officials, it was revealed that their morale was very low and they themselves were not sure of doing anything effective for the citizens in case of war or any catastrophe in the economic hub of Pakistan.

“The civil defence now only exists on paper because it does not have the required equipment and funds or trained manpower or the volunteers to perform any task. It can’t even let the sirens wail in case of air strikes,” a senior civil defence official said seeking anonymity.

He claimed that the volunteers registered with them were now doing various jobs to earn their livelihood, as there was no budget available to engage them with the organization while they could not be made available immediately if required as majority of them were not in contact for years now.

On the other hand, City District Government Karachi (CDGK) Fire Brigade Department, which is the most equipped and relatively active civilian rescue service in Karachi, is also nowhere near preparedness for any wartime situation because it has neither been asked to prepare for any disaster nor have its officials realized any such threat.

Background interviews with CDGK fire brigade officials revealed that they had not been put on any alert by the authorities while they themselves did not fear any situation that could go out of their control in the city.

“The city fire brigade is busy in its day to day preparedness but we have not been put on any alert from any quarters. However, in case of war, the fire brigade becomes a part of armed forces of Pakistan and used accordingly,” Jahangir Khan, a fire consultant hired by CDGK for revamping its fire brigade department, told The News.

City Chief Fire Officer Ehteshamuddin denied receiving any written or verbal orders either from CDGK or provincial government to be ready for any wartime situation. He, however, claimed that they were busy in extinguishing fires and rescuing people daily so they didn’t need any specific orders.

“As far as coordination with other organisations is concerned, when there is an incident in the city which goes out of our control, we seek help from Karachi Port Trust (KPT) and even Navy so there is no issue of lack of coordination between CDGK Fire Brigade Department and other authorities in the city,” he informed.

As far as other military-led land controlling authorities in the city are concerned, none of these organizations - despite having sensitive installations in their jurisdictions - have the ability to mitigate or manage large-scale disasters, including multiple air strikes.

One such organization is KPT which is vulnerable to enemy air strikes but its fire-fighting and search and rescue capabilities are negligible as compared to its size and importance.

Although KPT has a fire-fighting department but it has to often take support from the CDGK fire brigade to extinguish category two or three fires, like the one that engulfed Pakistan National Shipping Corporation (PNSC) building near Native Jetty bridge last year.

The same is the situation with the Defence Housing Authority (DHA) and a number of military cantonments in the city, which earn millions of rupees in the garb of taxes from citizens living in their civilian areas but even light rains and small fire incidents render them unable to rescue people timely and effectively.

Experts believe that none of the municipal service departments of both the civilian and military setups are realizing the threat of Indian air strikes or even any natural disaster of mass scale and were nowhere near to help and rescue citizens in any untoward situation.

They, however, termed the CDGK the only organisation which had the resources while it was also improving its existing rescue setup by building an Urban Search and Rescue Team of international standards with the help of National Disaster Management Authority in addition to a search, rescue and fire fighting academy.
Posted by Chief Editor at 4:19 PM No comments: