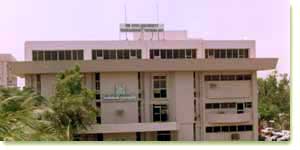 By Abdul Qadir Qureshi
The Charter Inspection and Evaluation Committee (CIEC) of the Sindh Government have appreciated the efforts of the Sir Syed University of Engineering and Technology (SSUET), Karachi, for implementation of its recommendations after its last visit.
The CIEC made this observation in its Fifth Inspection Report of June 2012 following its visit to the University in October last year.
The 6-member Committee, headed BY Dr S M Qureshi, had carried out inspection of the University on October 20, 2011. The committee was assisted by members of Experts Sub-Committees for the Departments of Bio-Medical, Electronic, Telecommunication, Computer and Civil Engineering and Computer Science.
The Chairman CIEC expressed the Committee’s satisfaction with regard to the compliance of its recommendations and stated that the interaction during visits by CIEC gad built-up more and more confidence between CIEC  and the University as  a result of which the University had progressed further and acquired “5 stars” rating  of the CIEC.
The members of Experts Sub-Committees in their overview expressed general satisfaction on the overall performance of the University and in this regard mentioned positive improvements in general in case of all the departments.
In its report the CIEC Chairman also appreciated the elaborate presentation given by the Registrar while Acting Vice-Chancellor explained queries made by CIEC members with regard to functioning of the University to their satisfaction.
He, however, suggested creating a greater feeling of ownership among the teachers and employees of the university while the teachers to be encouraged to go locally or abroad for training and acquiring of Ph.D. degrees to end the blockage of their further promotion.
During its inspection the Committee made major observations with regard to the establishment of the University, physical facilities, academic programs, enrolment, admission eligibility etc ., admission criteria, Bachelor, Masters and Ph.D  programs, scholarships/free-ship, research and development, quality assurance.
It was informed that the University has acquired membership of International Association of Universities and had signed MOUs with 11 foreign universities for linkage in various aspects.
It was communicated that about 40 percent of total students were awarded financial assistance/scholarships every year and in this regard Rs 40 million were allocated for scholarships and another Rs 10 million for financial assistance in the year 2011.
The body was also intimated that a total amount of Rs 217.4 million was provided as scholarships and financial assistance to 12,819 students during the last 15 years.
Posted by Chief Editor at 9:26 PM