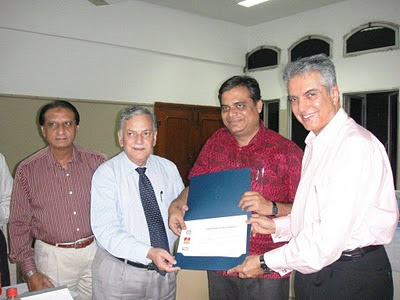 It was quite a big day for me on August 21 as I was presented a Certificate of Excellence by two of the leading Rotary personalities of the country, Aziz Memon and Syed Shahab Balkhi. It was deemed as a great honour for our Rotary Club of Karachi Airport as well.

Obviously every award as a significance of its own but the Rotary recognition is something that’s dearer to the heart because of the noble causes being pursued by this leading international voluntary organization of which I have been a member for the past six years now.

There was even greater pleasure to have received the award from a man called Aziz Memon, who has been one of my role models for the last many years. He was not only responsible for motivating me to join Rotary in 2004 but he has remained an inspiration all along with his deeds and words.

Different people have different reasons to know Aziz Memon because he has been blessed with such a versatile personality and for whom the sun never sets. He starts his day at office before 9 each morning and trust me he has the same energy level when we meet him late at night in various ceremonies.

His time management, besides quite a few other outstanding qualities, is truly incredible and I am sure we need to learn from him. He has set very high standards for himself but most importantly he meets the challenge with a smile.

Aziz Memon had rewritten the Rotary history when he was District Governor in 2007-2008. Now Shahab Balkhi has also taken over the reigns at a historic time, having become the first Governor of the newly founded District 3271, covering Sindh and Balochistan.

The visit of Aziz Memon and Shahab Balkhi to Rangoonwala Community Centre, where Rotary Club of Airports convenes its weekly meetings on Saturdays, on August 21 was a Red Letter Day in the history of our club.

The Club President, Anwar Jabeen Qureshi, was both happy and relieved. So was the Club Secretary, Shah Mohammad Anwar. Both these gentlemen had worked extremely hard to put the acts together in making the necessary arrangements for the visit of the two dignitaries at a rather short notice.

The other members of the club present on the occasion were Abdul Hamid, Mohammad Nazakat Ali, Shamim Khan, Wasim Yousuf, Sameer Baig and Mahmood Nawaz.

Besides the award presentation by Aziz Memon, there was a full board meeting chaired by Shahab Balkhi as it was also the Governor’s Official Visit to the club.

The Governor, who was generous enough to recognize our project of Mobile Library & Resource Centre in his speech in the installation ceremony on July 10, had a lively interactive session and he was thoroughly impressed by the efforts being made by the club.

He agreed that once the pilot project of Mobile Library & Resource Centre became ready our club will be in much better position to seek partner corporate organizations to spread it further.

He was informed that our club will be actively participating in community service by providing equipments to needy schools and colleges, donating books to educational institutions and public libraries, donating sewing machines to needy women, donating equipments to charity hospitals, holding free eye camps and medical clinic and holding career development seminars for youth.
Posted by Chief Editor at 3:03 PM Links to this post