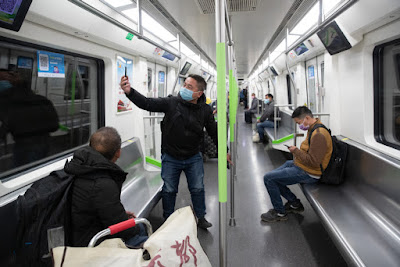 Wuhan, China's COVID-19 ground zero, is returning towards normalcy. It has re-opened for business and the subway service has also been resumed following over two months of suspension.
Travel controls on most of Hubei province, where Wuhan is located, were lifted on March 23 while the subways and long distance trains resumed on March 28.
The final restrictions preventing people from leaving the city of Wuhan are scheduled to come to an end on April 8.
The central Chinese city of Wuhan, once at the epicenter of the Coronavirus (COVID-19) epidemic, has gradually begun its journey towards normal life after a couple of months of lockdown as the authorities have lowered virus risk evaluation from high to medium. 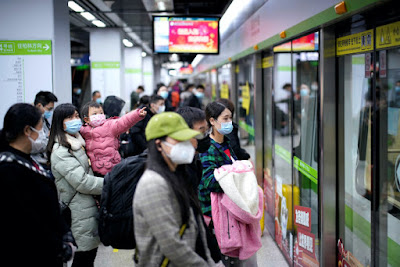 The necessary precautions still remained in place as the commuters of the subways and trains were required to have their body temperatures checked before entering metro stations. They were also required to sit in between empty seats.
The markets in the city of 11 million inhabitants have reportedly opened on March 30 but customers were scarce as they waited for things to improve further in the days to come.
According to the reports, around 70% to 80% of shops on the mall were found open but many of them imposed restrictions on how many people could enter while the shopkeepers set up dispensers for hand sanitiser and checked customers for signs of fever.
Wuhan’s bus and subway services are generally availed by thousands of people while commuting in and out of the manufacturing and transportation hub of central China.
Posted by Chief Editor at 4:15 PM 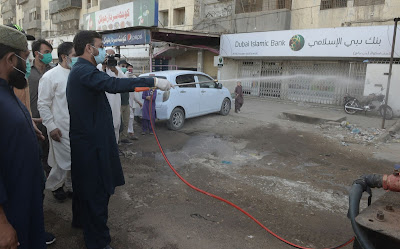 The Sindh Minister for Information and Local Government, Syed Nasir Hussain Shah, said that, in an attempt to prevent the spread of Coronavirus, campaigns of germicidal spray have been launched across the province.
“In the first phase, spray campaign has been started in Hyderabad, Nawabshah, Sukkur and Larkana,” the minister added, saying directives have already been issued for the commencement of spray campaigns in other districts as well.
Meanwhile the Mayor of Karachi Wasim Akhtar reviewed a fumigation drive in the Central district of Karachi, directing the KMC officers to ensure expeditious fumigation activities, especially around food streets of Burns Road, Boat Basin, Sindhi Muslim Housing Society, Muhammad Ali Housing Society, Hussainabad and Tower. 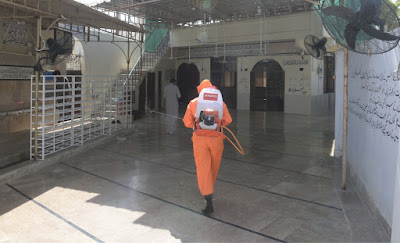 In the meantime, District health Officer, Malir, confirmed detection of three Covid-19 positive cases in Gulshan-i-Hadid Union Council-5&7 following which all out-patient departments and sections in public and private hospitals have been closed from April 3 until further order.
A government handout said that the provincial minister for Human Settlements and Special Development Ghulam Murtaza Baloch ordered the immediate closure of OPDs at a meeting of civil and health administration officers, held at the office of Malir Deputy Commissioner.
The DHO Malir, Dr Ahmed Ali Memon, informed the meeting that five corona positive cases have been detected in Malir, two patients in Landhi and three in Gulshan-i-Hadid.
The Minister urged the people to stay in homes and adopt social distance in the wake of reports about increase in the cases of coronavirus from local transmission in Karachi.
Posted by Chief Editor at 4:14 PM

The Sindh Health department on April 2 confirmed 52 new Coronavirus cases, taking the provincial tally of infected persons to 761, with 11 deaths including the first one outside Karachi, while overall the country’s figure stood at 2,386 with 34 deaths.
The provincial health minister, Dr Azra Fazal Pechuho, informed that the 10th person losing his life due Coronavirus (Covid-19) was a resident of Tando Mohammad Khan, who was brought for treatment to a hospital in Hyderabad.
The deceased, aged 65 years, was admitted to the hospital on March 28, the minister added, saying the man was member of a tableeghi jamat and was tested positive for coronavirus at the hospital.
The 11th corona related death was of an 86-year-old man from Karachi who passed away within 24 hours of his admission at the hospital.

According to the Sindh health department, Coronavirus infected cases reported from Karachi division and other six districts of the province, out of which 416 were local transmission cases, while the remaining infections were detected in passengers who returned from various countries and pilgrims returning from Iran.
The Sindh data updated at 6.15 pm showed 336 cases in Karachi, 273 in Sukkur, 137 in Hyderabad, seven in Larkana, six in Shaheed Benazirabad and one each at Dadu and Jacobabad.
Posted by Chief Editor at 4:12 PM

A Karachi resident, Yahya Jaffery, who has also been the first Coronavirus patient in the country, donated plasma for the possible treatment of critically ill COVID-19 patients.
Speaking to newsmen at a hospital where Yahya Jaffery donated the plasma, a senior haematologist, Dr Saqib Ansari said that the use of blood plasma received from patients who have recovered from the corona disease may help save lives of those suffering from the diseases.
Disclosing that plasma infusion in critical COVID-19 patients has given excellent results in other countries, Dr Saqib Ansari mentioned that before repeating the therapy in the country he and his team need permission from the government to conduct clinical trials, among other protocols and requisites.
Posted by Chief Editor at 4:09 PM 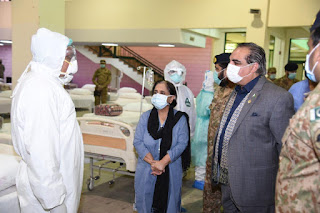 Volunteers and medical staff performed the inauguration of a 1,200-bed field isolation facility at the Karachi Expo Centre in the presence of Sindh Governor Imran Ismail, Sindh health Minister Dr Azra Pechuho and Corps Commander Karachi, Lt-General Humayun Aziz, on April 2.
While reviewing the arrangements at the emergently established corona treatment facility, the Governor also announced a provision of 5,000 sets of personal protective gears for the isolation centre.
It was announced that the centre will remain functional until the Coronavirus pandemic was completely eradicated.
Dr Azra Pechuho said that the Sindh government would provide all possible support to keep the isolation facility operational. The new facility is meant for patients who will be confirmed of having contracted the Coronavirus.
In addition to general isolation wards, the facility has an intensive care unit as well, said an official communication.
Posted by Chief Editor at 4:07 PM

Schools to reopen for administrative work

Responding to the request of the All Private Schools Management Association Sindh (APSMAS), the provincial government has allowed the schools to re-open their offices to perform administrative works. 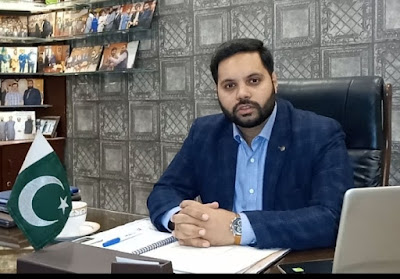 The APSMAS Chairman, Syed Tariq Shah, in a video message, informed the media on April 2 that the Government of Sindh has accepted their request and the administration blocks of the private schools will now be re-opening.
He expressed his gratitude to the Sindh Chief Minister, Syed Murad Ali Shah and the Provincial Education Minister, Saeed Ghani, for the prompt action of issuing the notification in this regard.
Tariq Shah, who is also Secretary General of the National Educational Council Pakistan (NECP), announced that the private schools will be operating their administration offices at the designated timings from April 3.
“The schools will be sending text messages to parents to inform them about the timings at which their administrative offices will remain open. All the standard operating procedures regarding Coronavirus (COVID-19) will be religiously followed because it’s binding on all of us to take care of each other,” he observed.
“The schools have been advised to consider those parents compassionately who have been severely affected by the prevailing crisis. Similarly the schools will not be charging any late fee as parents couldn’t do so due to the lockdown,” the APSMAS Chairman added.
“As the schools will now be collecting fees, it becomes their responsibility to disburse the salaries of all teachers at the earliest. I will urge them to do it as early as possible,” Tariq Shah requested.
He also appealed to the parents to be considerate in paying the fees without further delay as the schools were entirely dependent on fee collection to meet their fixed and running costs.
Posted by Chief Editor at 4:06 PM