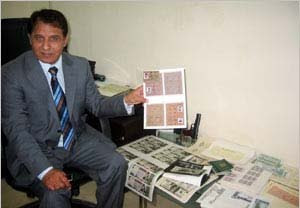 Federal Investigation Agency's (FIA) Corporate Crime Circle claimed to have arrested an alleged forgery expert and seized a cache of fake documents and currency from his possession.
According to FIA officials, the accused identified as Farid Anwar Khan was apprehended outside the Saddar passport office.
They said during the initial course of investigation, a huge recovery of forged, counterfeit documents, Pakistan passports, visa stickers, Pakistan and foreign currency, security, revenue papers, adhesive, printing machines and other items were seized on the pointation of the accused from this house, located in Sector 7-D, Surjani Town. Further investigations are underway. (NC Report)
Posted by Chief Editor at 12:36 PM Links to this post