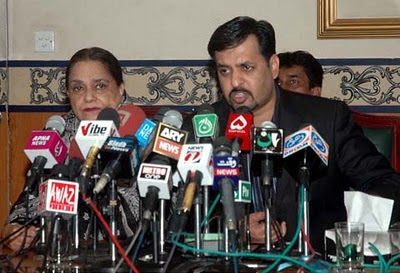 City District Government Karachi has established a special fund for prompt and quick rehabilitation of traders and shopkeepers who lost their all belongings in the fire incident at M.A Jinnah Road on Ashura.

On this occasion Nazim Karachi also appealed to government to compensate the trader’s community and shopkeepers as 50 percent cash payment and 50 percent loan without interest so that they could be rehabilitated as early as possible. He said that the fund is being established on the directive of Quaid-e-Tehreek Mr. Altaf Hussain and the city government has already opened account number 31618-0 for collection of donations in the Habib Bank, KMC Branch.

He said that Quaid-e-Tehreek had expressed desire for early rehabilitation of all the affectees and he had directed me and Naib City Nazim to establish this fund. City Nazim said that Quaid-e-Tehreek has a huge following and a large number of his workers and lovers would like to donate in this fund while the city government will also have a share in this fund. He also appealed to the people of Karachi to donate in this fund so that the affected business community could be rehabilitated soon.

Replying a question City Nazim said that the fire brigade has completed the fire extinguishing operation in the affected buildings of Bolton Market and the situation was totally under control. He however asked the people to avoid gathering in the affected area as their presence was creating hurdles in the swift working of fire brigade.

City Nazim said that Chamber of Commerce and Industry Karachi has also been involved in the fund established by city government and the collected money will be used through its representatives and the associations of business community. He also clarified that the city nazim or any coming administrator would have no role in its disbursement. Nazim Karachi said that our task will only be completed after full rehabilitation of all the affected traders and shopkeepers and till that time we will continue our efforts on a war footing basis. He said that the city government has also started survey of the losses suffered by the traders so that the total loss could be ascertained.

City Naib Nazim Nasreen Jalil said that the business community in Karachi was like the back bone of our economy and their loss would not be limited to themselves but adversely affect the whole economy of Pakistan. She said that we will have to work on emergency basis to combat this situation. City Naib Nazim demanded that the funds of crores of rupees allocated by federal government for rehabilitation of heritage should also be used for the restoration and reconstruction of heritage buildings at M.A Jinnah Road.

Posted by Chief Editor at 11:27 PM No comments: