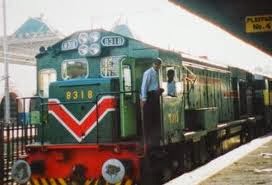 Maqsood-un-Nabi, an officer of the railway group, has been transferred from the Pakistan Railways Headquarters, Lahore, and posted as the Divisional Superintendent of the Karachi Division.

Before the new assignment, Maqsood-un-Nabi was working as the Chief Operating Superintendent at the Railway HQ Lahore and he now replaces Mahmood Lashari who, on transfer, has been posted as Director General Vigilance at the Railway HQ.

Earlier Maqsood-un-Nabi had served as the Chief Commercial Manager at Lahore and besides also having worked as the Deputy DS Railway at Karachi. He brings with him very rich experience in the field of railway operation as well as commercial sector.

“My main focus will be on punctuality of trains and passenger facilitation,” the DS Railways said in an interview adding that since he took over the punctuality rate went up from previous low of 73 percent to 87 percent at present and it will improve further in coming days with the kind of measures being taken by him.

He said that he had taken up the management sector as a challenge for himself and issued directives to divisional managers to bring improvement in their managerial skills to achieve the desired targets set for them which include punctuality of train operation, public facilitation and most important revenue generation.

Maqsood-un-Nabi remarked that back marketing of tickets has been controller by 99 percent and severe action taken against those involved in the menacing practices. He said that he has the full cooperation of SP Railway Police and Divisional Commercial Officer and black sheep in the force are being screened out.

The DS Railway added that he had also taken up the issue of railway’s land  grabbing and in his very first meeting with divisional officers he issued directive for developing a system to have immediate information about any case of land grabbing and initiation of immediate action by the anti-encroachment cell which too has been activated.

Under public facilitation program, he said, passengers going for upcountry dest inations are informed about delays in departure of trains through mobile phone messaging so that they may not have to face any inconvenience by reaching the station on time.

Similarly cleaning coaches of trains leaving for upcountry destinations is being ensured particularly with emphasis on water and power supply. He said he had issued strict instruction that there should not be repetition of any problem once identified.

He said that on his directive a railway is deputed at Cantonment Station who would check the trains and submit report about any event taking place during his duty hour.


The punctuality of train operation from Karachi has achieved considerable improvement during the last 2-3 months with almost all the trains except one or two running on time. 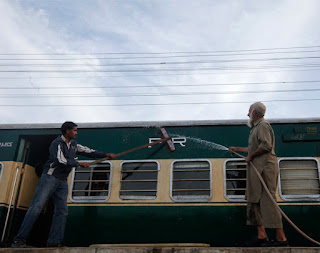 “The couple of trains which are facing late departures for about half an hour to two hours is because of certain unavoidable reasons,” Anzer Ismail Rizvi, Divisional Superintendent, Pakistan Railways Karachi Division, disclosed in an interview on January 6.

He revealed that the punctuality improvement has been achieved due to strict monitoring of train operation and motivation which resulted in improved maintenance of locomotives, coaches, signaling system as well track in the Division.

He stated that notwithstanding the ongoing financial crunch, the Railways Divisional authorities did this within their own resources. He pointed out that 57.5 Km of speed restrictions have now been normalized without spending any money thus resulting in running of trains with normal speed.

The Divisional Superintendent maintained that although the Railway Division has allotted 102 locomotives, it was operating 42 locomotives.

However, their maintenance has been improved bringing normalcy in the train operation. It also resulted in operating on an average two freight trains daily from Karachi.

He informed that the Railway Division earned 346 million rupees in excess during the last six months of the current financial year as compared to the same period of last financial year.

Anzer Ismail spoke about what he called a significant achievement and said that after a gap of 20 months with effect from January 12013, the Sukkur Express was now running with full composition after attachment of one Air-condition Sleeper and two Lower AC coaches which were withdrawn from service in May 2011 due to non-availability of power plant. He said these plants have now been made available after a lot of efforts and follow-up. 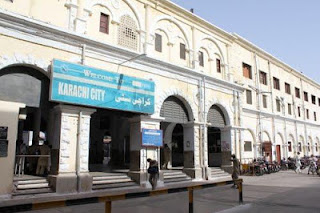 He said AC Sleeper Coach has a seating capacity of 16 while Lower AC coaches have a capacity of 76 each and will greatly facilitate the passengers intending to travel to Sukkur and Jacobabad.

As regards the future plans, DS Karachi Railways informed that efforts are being made to re-introduce Mehran Express which was a popular mode of journey from Karachi to Mirpurkhas and was closed due to non-availability of locomotives.

Anzar Rizvi further informed that railway track from Karachi to Kotri has been rehabilitated while that of Down track was in progress which has brought improvement in speed and running time.

According to him the track rehabilitation from Hyderabad to Mirpurkhas was also in progress and will be completed in about six months which will reduce running time between the two destinations bringing it down from 90 to 60 minutes.
Posted by Editor at 3:20 PM