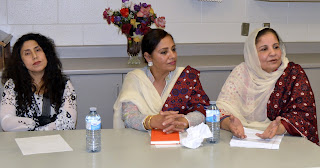 The Sindhi Adabi Sangat, the literary association of Sindhi diaspora, hosted a welcome reception for two visiting female writers from Sindh, Irshad Abbasi and Shabnam Moti, at the Brampton Town of Toronto which was largely attended by the representatives of the Urdu-speaking and Punjabi communities as well.

The speakers at the reception, presided over by a noted poetess, Shoro Shahnaz, talked about the decades old rich literature, culture and heritage of Sindh and vowed to promote it at all levels. They reiterated the need to encourage tolerance and human values through literature and poetry, so essential for a peaceful and harmonious life.

Irshad Abbasi, a noted poetess and columnist, in her discourse said that she was born in the house of a great progressive politician Qazi Faiz Mohammad who taught his children to resist all ill happenings in the society.

She was of the opinion that Pakistan in general and Sindh in particular suffered from degradation because of the declining educational standards. Shabnam Moti, also from Sindh, endorsing the views of Irshad Abbasi, regretted that in the Sindhi society woman was still being ill treated. 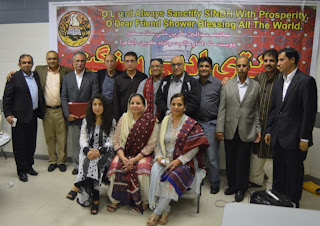 “The societies flourish when women folk is granted equal status and equal opportunities so that they work shoulder to shoulder with their male compatriots something which has yet not happened in Pakistan,” she felt.

Shabnam Moti stressed the need for promoting positive and meaningful literature besides imparting quality education to our kids to prepare them for building an egalitarian society.

Mohammed Nadeem, Chief Editor, Pakistan Times, published from different cities of Canada and USA, Munir Pervaiz Saami, a poet and Head of Progressive Writers Forum of Canada, and Tahir Qazi, a Punjabi and Urdu writer, also addressed the gathering and appreciated Sindhi diasporas literary and social activism in the North American cities and in Toronto in particular. 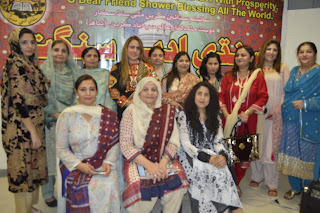 The Secretary of the Sindhi Adabi Sangat Zulfiqar Shaikh welcomed the guests and dedicated the day to great poet of Sindh Ustad Bukhari and legend leader Qazi Faiz Mohammad on account of their anniversaries on program’s day.

Both the visiting poetesses and presiding personality Shoro Shahnaz enlightened the audience with their poetry while Dr Rabia Atiq Abbasi recited the poetry of Qazi Faiz Mohammad.
Posted by Chief Editor at 1:28 PM Links to this post

The Sindhi Community of Toronto held a meeting with Jason Kenney, Federal Minister for Employment, Social Development and Multicultural, together with Tim Hudak, opposition leader of Ontario Legislative Assembly to discuss various issues including visas to spouses, delays in immigration, educational, health, and culture.

The delegation conveyed its grave concerns in relation to the worsening law and order situation in the region and requested the Canadian government to play its due role.

Senior community members, Khair Mohammad Kolachi and Shah Nawaz Shah thanked ’s ruling PC Party leader Jason Kenney for his support and further explained the dynamics of the Sindhi community in conjunction with its cultural integration to Canadian society and vibrant role to multiple the plurality of .

The Secretary of the Sindhi Adabi Sangat, a society promoting Sindhi literature in, Zulfiqar Shaikh, highlighted the efforts of the society with respect to literature and culture. He also expressed concern over visa issues that the Sindhi singers and artists are facing, whose presence to the events in Canadian society will promote cultural integration. Spousal and parental visa issues were also brought to light and that family reunion times should be shorter.

The Sindhi Association of North America’s Vice-President, Aijaz Ahmed Kolachi, praised the efforts of Kenney and apprised him of the continued philanthropic and social development activities including education, poverty and disaster relief in .

Kolachi stressed the need for CIDA’s mutual co-operation with  and Literary Society so as to ensure the proper and transparent allocation of funds to the grassroots level.  He also brought to his attention the role of Central President SANA, Jamil Daaudi, General Secretary, Noornisa Ghanghro, and community donor Aijaz Turk for establishing a school system in Sindh for needy and poor people.

The Executive Council member of SANA Toronto Chapter, Khalida Memon, Rashid Pirzada, Rajesh Rathi and Vishan Lohana, expressed their concerns over intolerance and health issues and deteriorating standards of education in Sindh and other parts of.

They also pledged their co-operation with the government of  and further added that, such meetings will surely bring a positive result. The both sides agreed upon to explore ways to work together in the sector of education being a best way to enlighten people, address issues of poverty and extremism.

Federal Minister Jason Kenney praised Aijaz Kolachi for hosting and arranging such a high profiled meeting with the Sindhi community, Literary Society and . He recognized the core issues in, especially those of Sindh and ensured his support in future.

In the end, Tim Hudak, Opposition Leader of Ontario, promised to solve the local issues and requested to join hands with him to help formulate and implement his manifesto. The Sindhi Diaspora presented Canadian leaders the gift of Ajraks a symbolic cultural identity of civilization since 5000 years.