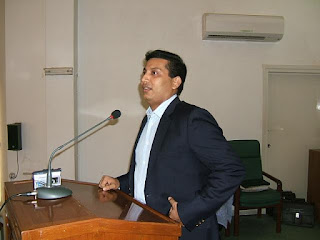 The Youth Affairs Department of the Government of Sindh recognized the significance of media by joining hands with the Institute of Journalism, in holding a discussion on Media Patronage for Youth Development’ at the Arts Council of Pakistan on October 13.

Syed Faisal Ali Subzwari, Sindh Minister for Youth Affairs, was the chief guest in the forum which was presided over by Shoaib Ahmed Siddiqui, Secretary Youth Affairs to the Government of Sindh.

The Sindh Youth Minister candidly expressed his views about the current media practices and concluded that the youth development issues needs to be highlighted and should be patronized by media.

“Media being the fourth pillar of Pakistan must patronize youth development issues and should raise the voice of youth. The young journalists should be trained in a way that they can easily become the voice of youth and play their role effectively,” he stated.

Shoaib Siddiqui reckoned that the youth of the country was capable enough to make its presence felt in the field of media.

“Our youngsters do have the capacity to meet the challenge. Many of them have become successful media professionals. They have the talents to do the job. They, however, could fine tune their skills after completing their education,” he advised.

“Besides the young professionals the media in general should take the responsibility of playing its due role in patronizing the youth development,” Shoaib Siddiqui added.

The event, attended by a large number of media professionals and aspiring young journalists, concluded with vote of thanks presented by Nauman Adil, Executive Director, Institute of Journalism.

The volleyball tournament will be held at the Institute for Advancing Careers and Talents, one of iLEAD’s partner institutes. Eight colleges are participating in the tournament: Two pools consisting of four institutes each will contest in the tournament. Volleyball matches begin on February 15, 2010 and will last to February 19, 2010, when the final will be played.
Posted by Chief Editor at 12:35 AM Links to this post 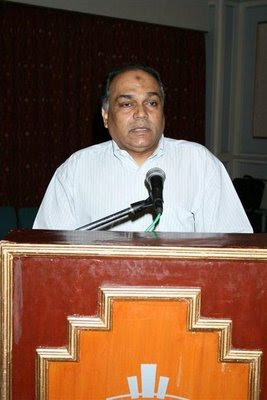 The Sindh government has activated the Pakistan Sports Foundation Relief Fund (PSFRF) for the specific purpose of providing financial assistance to the athletes facing financial hardships due to physical disabilities or protracted ailment.

Shoaib Ahmed Siddiqui, Secretary Sports, Government of Sindh, has revealed that besides helping the deserving athletes in need, the Regional Committee of the PSFRF was also taking care of the legal heirs of the deceased ones.

“The seven-member Regional Committee of the PSFRF was formed in November 2008 with a revolving grant of Rs 500,000 at our disposal with the objective of helping the deserving sports-persons of repute and to legal heirs of those stalwarts who have died. We have been providing financial assistance in the form of monthly scholarships as well as lump sum grant-in-aid,” he disclosed.

Shoaib Siddiqui himself is a member of the Regional Committee of the PSFRF that also includes former Test cricketer and present chief selector, Iqbal Qasim, besides, Mir Haider Ali Talpur, Shah Riazuddin and Rahat Ali Shah.
“The families of former Pakistan hockey captain, Munawwar-uz-Zaman and former Test cricketer, Taslim Arif, were provided financial grant of Rs 50,000 each. Similarly a payment of Rs 50,000 was made to the family of cricket coach Khushi Mohammad,” Shoaib Siddiqui disclosed.

It’s indeed quite heartening to note that the government has started taking care of the unpriveleged athletes who certainly deserve the monetary support after having spent their life in the sporting arena.

Numerous sporting greats have had to struggle to make their ends meet because only a few of them had the luxury of jobs and that too during the peak of their career. The majority of them couldn’t save for the rainy day and life has remained tough for them generally.

Sports has become an industry worldwide but the same cannot be said about Pakistan with cricket being the sole exception. Under the circumstances the state does have the responsibility of looking after the athletes.

The amount being disbursed by the Pakistan Sports Foundation Relief Fund (PSFRF) at the moment certainly looks peanuts but it’s a mighty big move in the right direction. As they say it’s never too late to do something good.

The government should allocate more funds to this scheme in order to assist greeater number of athletes. This will go a long way in encouraging more youngsters to take to sports.
Posted by Chief Editor at 12:05 AM No comments: Links to this post