Is KESC implying all Karachiites are thieves?

By Irfan Aligi
As part of its efforts to curb power theft, the Karachi Electric Supply Company (KESC) has come up with a unique way of reminding consumers that stealing electricity results in negative consequences, however, the power utility has ignored the fact that in the process it is humiliating the bill-paying and law abiding consumers. 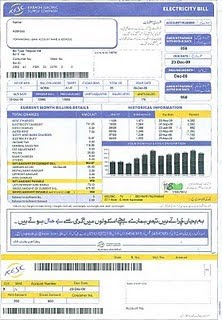 The KESC has printed a shameful slogan on electricity bills, which goes as: “Hum bijli churatay hain tub hi hamaray bachay iskoolon main garmi say behaal hotay hain” (Since we [KESC’s consumers] steal electricity, our children have to suffer the heat in schools.)For those who pay their bills on time and still endure long hours of load shedding, this is like rubbing salt into the wounds.
Those consumers who are being sent a bill obviously have legal connection, and even if they are stealing power through the kunda (hook) system, then it is the KESC’s inefficiency of not being able to take stern action against power thieves that is to blame.
Humiliating the law-abiding citizens through implying that they are power thieves is a strategy that makes little sense.Instead of hurting the self-esteem of legal consumers, the KESC should take measures to improve flaws in its distribution system and reduce line losses.

Talking to DT, many citizens said they felt offended by the humiliating slogans printed on the KESC bills.They said if the government was unable to address the citizens’ woes, which have been worsened due to the tariff increase; it should at least ask the KESC to remove such language from bills.
Posted by Chief Editor at 2:00 PM