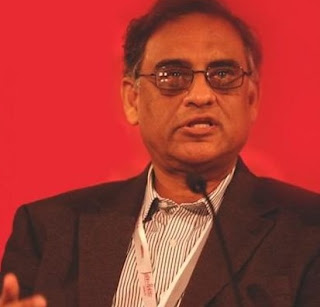 Dr Asif Aslam Farrukhi, who passed away in Karachi on June 1, had been rushed to a local hospital just a day earlier where he could not survive a cardiac arrest.

He was indeed a visionary writer, critic, translator, columnist and scholar, credited to have set new trends in the promotion of art and literature.

He translated a number of books from English language to Urdu. In recognition to his literary services he was awarded 'Tamgha-e-Imtiaz’ by the President of Pakistan in 2005.

He had attained education first from the famous Saint Patrick's High School, Karachi and later studied medicine at Dow Medical College, Karachi, before studying public health at Harvard University in the United States.

His professor and writer father Aslam Farrukhi, who himself was author of several books, and family background led him to contribute to literature in Pakistan.

Dr Asif Farrukhi was the co-founder of the Karachi Literature Festival which is being held every year for the past one decade. It's the platform where the writers of different countries and languages do gather and discuss the issues of writings and writers.

He was known to having played a dynamic role in promoting and backing young writers either by assisting them in publication of their books or introducing them at the literary gatherings and writing on their works. He was equally keen in promoting senior writers and artists and junior ones.

He also wrote for English newspapers and periodicals. Once he played a proactive role at the Goethe Institute and organized literary sittings.

He was a senior member of the Halqa-e-Arbaabe Zauq (HAZ) Karachi and presented several papers on literature during its various gatherings.

As a senior member of the Arts Council of Pakistan, Karachi, he had been playing a pivotal role in holding the International Urdu Conference along with its President, Muhammad Ahmed Shah, and other members of governing body.
Posted by Chief Editor at 8:32 PM